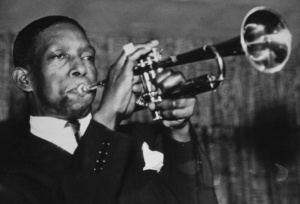 “Blue Bossa” by Kenny Dorham blends hard bop with bossa nova and was probably influenced by his trip to the Rio de Janeiro Jazz Festival in 1961. After the 1959 Cuban Revolution, the US State Department was concerned lest economically stressed South American countries align with Cuba, rather than the United States. In an effort to improve relations, the State Department set up a tour in 1961 which included guitarist Charlie Byrd (substituting for Dave Brubeck, who wasn’t available), accompanied by bassist Keter Betts and percussionist Buddy Deppenschmidt. Also on the performance tour were Kenny Dorham, Curtis Fuller, Zoot Sims, Al Cohn, Herbie Mann, Ahmed Abdul-Malik, Ronnie Ball, Ben Tucker, Dave Bailey, Ray Mantilla and others. In 1962, a second tour, this one lasting six months, toured 23 countries in South America. Paul Winter and Herbie Mann were on this tour and recorded bossa nova albums in Rio de Janeiro that year. “Blue Bossa” was first recorded in 1963 by Joe Henderson and released on the “Page One” album that year.

McKinley Howard “Kenny” Dorham (30 August 1924-5 Dec 1972) was one of the most highly regarded trumpet players of his lifetime, as can be seen by this listing from Matt Leskovic of jazz.com:  Dorham replaced Fats Navarro in Billy Eckstine’s band in 1946, Miles Davis in Charlie Parker’s quintet in 1949, and Clifford Brown in Art Blakey and Horace Silver’s Jazz Messengers in 1954 and again in the Max Roach group in 1956. Dorham was outstanding on the 1954 album “Horace Silver and the Jazz Messengers” and replaced Clifford Brown in the Max Roach Quintet from 1956 to 1958. Dorham’s musical education began with piano at age seven and went to trumpet in high school. From 1963 to 1964 he recorded six albums on Blue Note with Joe Henderson. In 1971 he told Art Taylor of “Down Beat” that he intended a greater concentration of his energy on education rather than performance. He died of kidney disease in late 1972. Art Blakey had described him as the uncrowned king of modern jazz.