Tune in weekday mornings to hear our favorite versions of “Blue Skies.” Rodney Franks presents Stories of Standards Monday through Friday at 7:50 and 8:50 am! 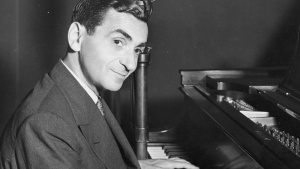 When Belle Baker asked Irving Berlin if he had a song she could add to the Rodgers and Hart musical Betsy, he had just completed “Blue Skies” as a Christmas gift to his newborn daughter. It was a resounding success and the opening-night audience demanded 24 encores from the star, Belle Baker. She forgot the lyrics on the final encore, leading Irving Berlin to sing them from his seat in the front row. The show was not so successful and closed after 39 performances. Betsy was produced by Florenz Ziegfeld Jr, with the book by Irving Caesar and David Freeman. One of nine songs Al Jolson sang in The Jazz Singer, the first feature-length motion picture with sound, the song is featured in the wedding at the beginning of Star Trek: Nemesis, sung by Commander Data, with a repeat by his brother, the android B-4.

Irving Berlin (born Israel Beilin; Yiddish: ישראל ביילין‎; May 11, 1888 – September 22, 1989) was born in Russia, one of eight children of Moses, a cantor, and Lena Lipkin Beilin, and immigrated to the US with his family at the age of five after a pogrom. After his father’s death in 1896, all the children earned what money they could, his sisters wrapping cigars, his older brother assembling shirts, and Israel selling newspapers on the street. He augmented his paper sales by singing. He left home and with some friends became itinerant singers before he became a singing waiter in 1906. His first song “Marie from Sunny Italy” was published with a spelling error on the sheet music, changing his name to Berlin. His first major hit was “Alexander’s Ragtime Band” (1911) and he became famous early in his career. Over the course of 60 years, he wrote over 1000 songs, including the scores for 20 original Broadway shows and 15 films. George Gershwin said of him that Berlin was “the greatest songwriter that has ever lived” and Jerome Kern said, “Irving Berlin has no place in American music—he is American music.” He cofounded ASCAP, founded his own music company, and built a Broadway theater, The Music Box. He also established the God Bless America Fund, which receives all income from his patriotic songs and distributes it to the Boy Scouts and Girl Scouts. He received the Army’s Medal of Merit in 1945, a Congressional Gold Medal in 1955, and the Freedom Medal in 1977.