Tune in weekday mornings to hear our favorite versions of “Caravan.” Rodney Franks presents Stories of Standards Monday through Friday at 7:50 and 8:50 am.

“Caravan” was first recorded Dec 19, 1936 by Barney Bigard and His Jazzopaters. a breakout group from the Duke Ellington Orchestra; on its release the following year, Juan Tizol was listed as the sole composer. He is said to have  originated the tune before leaving Puerto Rico, while Ellington arranged the song for orchestra. According to Jazz Standards Ellington is quoted in Stuart Nicholson’s Reminiscing in Tempo: A Portrait of Duke Ellington as saying “… that’s one of those things Tizol came up with. See, it wasn’t in tempo, he stood [and played it] sort of ad lib. He played it, [the] first ten bars, we took it and worked out the rest of it.” Initially Mills, as manager, paid Tizol twenty-five dollars for the tune; after it became a hit Tizol was given a cut of the royalties. 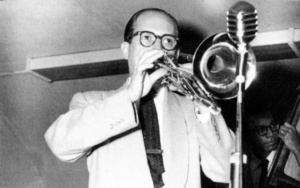 Juan Tizol Martinez (22 Jan 1900 – 23 April 1984) was born in Vega Baja, Puerto Rico, where he initially studied violin, then switched to valve trombone. His primary teacher was his uncle Manuel Tizol, who was the director of the municipal band and the symphony in San Juan. In 1920 Tizol joined a band traveling to work in Washington, D.C., where they took up residence at the Howard Theater and first met Duke Ellington. Arthur Whetsol, a trumpeter with whom Tizol had played in the White Brothers Band, recommended Tizol to Ellington , who then hired him as one of two trombone players and the fifth voice in the brass section of the orchestra. Tizol was known for being one of the best sight-readers and overall musicians in the band, playing with great accuracy and considered the solid rock of the trombone section. In 1944 Tizol left the Ellington Orchestra to play with the Harry James Orchestra where he could spend more time with his wife, who lived in Los Angeles. From 1951 to 1953, with James’s drummer and his alto saxophonist, Tizol returned to the Ellington Orchestra. For the rest of his life he primarily stayed on the West Coast, where he died of a heart attack two years after the death of his wife Rosebud. 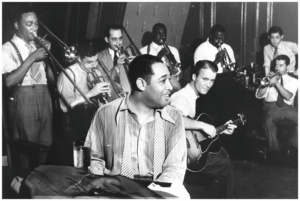 Edward Kennedy “Duke” Ellington’s (29 Apr 1899 – 24 May 1974) abilities as bandleader, composer and pianist are unparalleled, with more than 1000 of his compositions being recorded, and many of them becoming jazz standards, making his the largest recorded personal jazz legacy. His many awards, including honorary doctorates and the Presidential Medal of Honor, bear witness to his charm, talent, musical ability and the skill with which he brought an orchestral approach to jazz and wrote to the greatest talents of each of his band members, many of whom remained in the band for thirty or more years. Both of his parents were pianists and Ellington took piano lessons as a child, although he was at the time more interested in baseball and his first job was selling peanuts at Washington Senators baseball games. When fourteen years old he started slipping into Frank Holiday’s poolroom, where the resident piano players ignited his interest in the instrument, although he said in his autobiography that he missed more piano lessons than he attended, thinking at the time that he was not particularly talented. With ongoing music lessons in harmony and music reading he grew sufficiently attached to music that he turned down an art scholarship to the Pratt Institute in Brooklyn. He then dropped out of the Armstrong Manual Training School, three months before he would have graduated from studies in commercial art. With an income and contacts formed through his work as a freelance sign painter, he became a successful pianist, bought his own home and formed a band. When his drummer left to join the Wilbur Sweatman Orchestra in New York City, Ellington moved to Harlem, where he became part of the Harlem Renaissance. The income was not particularly well-paid and they returned to Washington, D.C., although in 1923 they moved to the Hollywood Club in New York and got a four-year engagement, giving them a solid base. They made eight records in 1924, and soprano saxophonist Sidney Bechet joined them for a while, lending his influence to the band. An October 1926 agreement with agent-publisher Irving Mills gave Mills a 45% interest in Ellington’s future, leading to Mills frequently taking a co-creator credit on future songs, including “Caravan”. Ellington was awarded a posthumous Pulitzer Prize Special Award for music in 1999. On February 24, 2009, the United States Mint issued a coin with Duke Ellington on it, making him the first African American to appear by himself on a circulating U.S. coin.