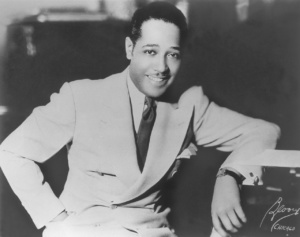 Duke Ellington wrote “Cotton Tail” in 1940, based on the rhythm changes in George Gershwin’s “I Got Rhythm”. His first recording featured a tenor saxophone solo by Ben Webster. Ellington later added lyrics, which were then augmented by lyrics based on the 1940 recording of Lambert, Hendricks and Ross.

Duke Ellington (Apr 29, 1899 – May 24, 1974), composer, bandleader, pianist, was noted for the grace, elegance and inventiveness of his musicand his songs. The list of his great compositions is astonishing, and his contributions to the field of jazz encompass form, direction, and overall sound. In the 1920s and 1930s he incorporated African influences, an early foray into world music. Ellington’s ability to write with the specific talents and range of the musicians he worked with in mind created what Billy Strayhorn called the “Ellington effect” and illustrate the complexity of his approach. Ellington’s image is on a U.S. postal stamp, he received honorary doctorates and the Presidential Medal of Honor. The 100th anniversary of his birth was celebrated with a nationwide Centennial. He was and is a major influence on music.

Jon Hendricks (Sep 16, 1921 – Nov 22, 2017) vocalist, lyricist, composer, screenwriter, playwright, educator and actor, was one of the originators of “vocalese”, adding lyrics to instrumental songs and substituting voices for instruments, was described as “the James Joyce of jive” by Time magazine. One of fourteen children of an AME pastor, the family moved frequently before settling in Toledo, Ohio. A child prodigy, he was offered a position with Fats Waller when twelve years old. As a teenager he sang regularly on the radio with Art Tatum. After serving in the Army during WWII, Hendricks studied pre-law at the University of Toledo until his GI Bill benefits ran out. He then took up the offer Charlie Parker had made a couple of years earlier to go to New York City and look him up. In 1957 he formed Lambert, Hendricks and Ross with Dave Lambert and Annie Ross, touring the world and earning the title of “Number One Vocal Group in the World” for five years in a row from Melody Maker magazine. He moved his family to London in 1964, largely to provide a better education for his children. In 1985 he provided lyrics for Manhattan Transfer’s album “Vocalese”, which went on to win an Oscar. Known as the “James Joyce of Jive”, Hendricks taught at the University of Toledo, received the NEA Jazz Master Award in 1993, multiple Grammys, an Emmy, a Peabody and in 2004 France’s Legion of Honour.