Tune in weekday mornings to hear our favorite versions of “Epistrophy.” Rodney Franks presents Stories of Standards Monday through Friday at 7:50 and 8:50 am!

Thelonious Monk and Kenny Clarke composed “Epistrophy” in 1941; Cootie Williams and his Orchestra first recorded the song in April 1942 under the title “Fly Right” and again in 1948, using the title “Epistrophy”, as the B side of Thelonious Monk’s single “In Walked Bud”. The word “epistrophe,” pronounced ɛˈpɪstrəfi, refers to a literary device in which a word or phrase is repeated at the end of successive clauses or sentences. Clarke composed the primary theme, while Monk wrote the chords. This was the first song copyrighted by Thelonious Monk. “Epistrophy” appears on almost every live album recorded by Monk, as he used it as his closing tune for many years. 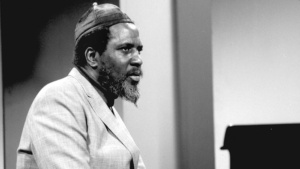 Thelonious Sphere Monk (Oct 10, 1917 – Feb 17, 1982), with Dizzy Gillespie and Kenny Clarke, were considered to have created bebop in 1940, while Charlie Parker was added to the group in 1941. In the mid-1950s, Monk was acclaimed as a master, the critics and fans of jazz having recognized the genius of his style, which had been fully formed by the mid-1940s. Famous for his inventiveness and style; his beret and dark glasses became icons of jazz. He toured through the 1960s before suddenly retiring in 1973, living in seclusion (with few appearances) until his death in 1982. Though known to be ill, doubts remain as to the exact nature of his illness. During his last years he was largely supported by his wife Nellie and Pannonica de Koenigswarter, whose devotion to jazz started when she first heard Monk’s album “Round Midnight.” 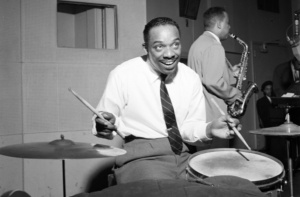 Kenneth Clarke Spearman (Kenny Clarke) (Jan 9, 1914 – Jan 26, 1985) entered an orphanage when five years old and started playing drums there a few years later.  He started playing drums and vibraphone professionally as a seventeen year old where he replaced the then-standard use of bass drum as a time-keeper with a combination of cymbal and snare drum. The sound of his rimshot-snare sequence led to his nickname of Klook, short for Klook-Mop. Clarke was drafted in 1943, married first wife Carmen McRae while in basic training in 1944, and went AWOL for four months during which time he toured with Cootie Williams and Dinah Washington. He was captured and sent to Europe, where he became part of the Special Services (entertainment) leading, singing, and playing drums, trombone and piano. He converted to Islam after his Army discharge, taking the name Liaquat Ali Salaam. Clarke moved to Paris in 1956, where he married Daisy Wallbach in 1962, taught music, played in jazz festivals and made his last recording less than a month before his death of a heart attack. In a Down Beat interview he said “It’s the music that’s important. That’s the legacy we leave behind.”