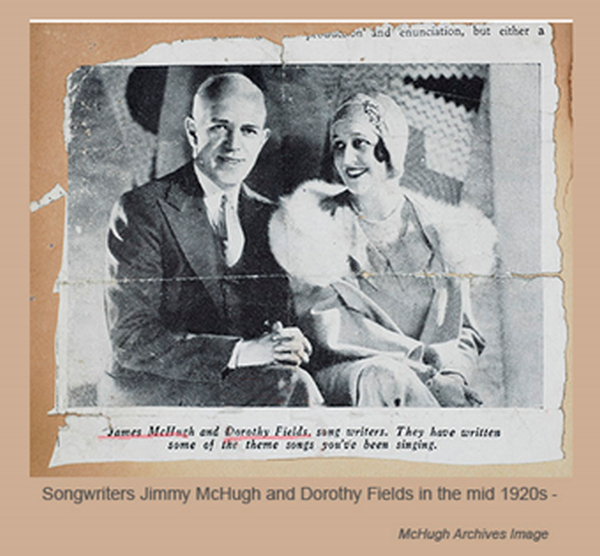 “Exactly Like You” was one of two songs written by Jimmy McHugh and Dorothy Fields that was introduced in Lew Leslie’s “International Revue” on February 25, 1930, at the Majestic Theater in New York City which went on to become jazz standards. The other song was “On the Sunny Side of the Street”. “Exactly Like You” hit the charts several times during the 1930s and has been recorded over 250 times.

Jimmy McHugh (10 July 1894-23 May 1969), who wrote over 500 songs, started his career in Boston, where he wrote songs, worked first as rehearsal pianist for the Boston Opera House, then as a pianist-song plugger for Irving Berlin’s publishing company. In 1926 he moved to New York City, where he wrote songs for the Cotton Club revues in Harlem, one of which was “When My Sugar Walks Down the Street” (lyrics by Gene Austin, credited to publisher Irving Mills). One of his best-known partnerships was with Dorothy Fields, starting with the all-black Broadway musical “Blackbirds of 1928”, which starred Adelaide Hall and Bill Bojangles Robinson and included the songs “I Can’t Give You Anything But Love” and “Diga Diga Doo”.  The duo moved to Hollywood, where they worked on films in the 1930s. McHugh then collaborated with several lyricists, including Frank Loesser and Harold Adamson. He was inducted into the Songwriters Hall of Fame in 1970.

Dorothy Fields (15 July 1904-28 March 1978), lyricist and librettist, wrote over 400 songs and worked on 15 stage musicals and 26 movies. She met J. Fred Coots, co-author of “Santa Claus Is Coming to Town”, and while they didn’t write anything together he did introduce her to Jimmy McHugh, who asked her to provide some lyrics for “Blackbirds of 1928”. She hit her lyrical stride with “Delmar’s Revels”, for which she wrote the words to “I Can’t Give You Anything But Love, Baby”. The two wrote together until 1935. She began working with other composers, including Jerome Kern, with whom she wrote for the movie “Roberta” (1935) as well as “Swing Time” (1936) which earned the duo an Academy Award for Best Original Song in 1936 for “The Way You Look Tonight”. “Swing Time” introduced “The Way You Look Tonight”, “Pick Yourself Up” and “A Fine Romance”, the last of which was later used as the title theme song for the television series of the same name, which starred Judy Dench and Michael Williams. She was inducted into the Songwriters Hall of Fame in 1971.