Stories of Standards—Footprints by Wayne Shorter 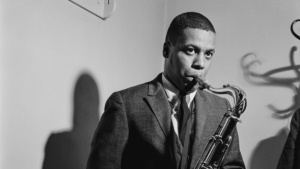 “Footprints” (1966) by Wayne Shorter, first appeared on his 1966 album “Adam’s Apple.” Wayne Shorter (Aug 25, 1933 – present) saxophonist, composer, bandleader, experienced a life-changing epiphany as a 15-year-old when he saw Lester Young at a Norman Granz Jazz at the Philharmonic show in Newark along with Stan Kenton, Dizzy Gillespie, Charlie Parker and Russell Jacquet (“Illinois” Jacquet). By the following year he had a clarinet and was studying music. He soon switched to tenor saxophone and formed the band “The Jazz Informers”. Shorter worked his way through New York University by playing with the Nat Phipps Orchestra and shortly afterwards was given the nickname “The Newark Flash” for his speed and facility on the tenor saxophone. He is noted for his influence on both hard boppers and fusionists.

In 1957, just as he was becoming well known, Shorter was drafted into the Army. When he returned in 1959 he started jamming with John Coltrane and Sonny Rollins. In August of that year he joined Art Blakey’s Jazz Messengers, where he became musical director and contributed several original compositions. In 1964 Miles Davis invited Shorter on a road tour that included Davis, Herbie Hancock, Tony Williams and Ron Carter. This lasted for six years. During his time with Miles Davis he also recorded several albums for Blue Note Records. In 1970 he formed the Weather Report group with fellow Davis alumnus Joe Zawinul; they released 16 albums in 15 years. After leaving the Weather Report Shorter continued recording and leading groups in jazz fusion, including a 1988 tour with Carlos Santana. In 1989 Shorter’s sax solo on Don Henley’s song “The End of the Innocence” was a hit. In 1997 he worked with Herbie Hancock and their recording of “Aung San Suu Kyi” won Grammy Awards for each of them. He has won 11 Grammy Awards, the Miles Davis Award, an NEA Jazz Masters Award, an Honorary Doctorate of Music from the Berklee College of Music and the Jazz Journalists Association Jazz Award. In 2017 he won the Polar Music Prize, a Swedish international award, and the Ralph Schock Prize in Musical Arts from the Royal Swedish Academy of Sciences. In 2018 he was awarded Kennedy Center Honors. Wayne Shorter is a Nichiren Buddhist and a member of Sōka Gakkai. His biography, written by Michelle Mercer, is entitled “footprints: The Life and Music of Wayne Shorter”.