Stories of Standards—”I Mean You”

“I Mean You”, by Thelonious Monk and Coleman Hawkins, was first recorded by Hawkins in December, 1946. Monk made his first recording of the song on July 2, 1948, for the “Wizard of the Vibes” sessions and featured Milt Jackson on vibraphone. Chaka Khan wrote lyrics to the tune, and recorded that version on the album “Echoes of an Era”. Jon Hendricks wrote lyrics and gave it the title “You Know Who”; this version was recorded by Carmen McRae on the album “Carmen Sings Monk.” 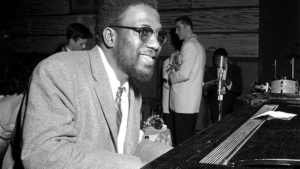 Thelonious Sphere Monk (Oct 10, 1917 – Feb 17, 1982) is the second-most recorded jazz composer after Duke Ellington, an amazing feat, given that Monk composed about 100 songs and Ellington wrote more than a thousand pieces. One of a very few musicians to have been featured on the cover of “Time” magazine (as were Louis Armstrong, Dave Brubeck, Duke Ellington and Wynton Marsalis), Monk was shown on the cover of the Feb. 28, 1964 issue. His compositions that became part of the standard jazz repertoire include “‘Round Midnight“, “Blue Monk“, “Straight, No Chaser“, “Ruby, My Dear“, “In Walked Bud“, and “Well, You Needn’t“. He was born in Rocky Mount, North Carolina, and moved in 1922 with his family to an area of Manhattan, New York City, known as San Juan Hill for the many African-American veterans of the Spanish-American War who lived there. Known for wearing suits, hats (particularly berets) and sunglasses,  he also was known for pausing during performances to stand up and dance for a while before returning to the piano. As a teenager, Monk toured with an evangelist, before becoming the house pianist at Minton’s Playhouse, a well-known Manhattan nightclub. He lived at the time in the same neighborhood as James P. Johnson, and knew him, regarding Johnson and Duke Ellington as early influences on his style. His first studio recordings were made with the Coleman Hawkins Quartet. In August 1951, police spotted Monk and Bud Powell sitting in a parked car. A search revealed drugs, probably not belonging to Monk, but a good enough reason for the police to pull Monk’s cabaret license, making it impossible for him to perform in public in New York City for several  years. Monk visited Paris for the first time in 1954, where Mary Lou Williams introduced him to Baroness Pannonica “Nica” de Koenigswarter, the patroness of jazz who became and remained a friend of his for the rest of his life. In 1993 he was awarded the Grammy Lifetime Achievement Award and in 2006 was awarded a special Pulitzer Prize for “a body of distinguished and innovative musical composition that has had a significant and enduring impact on the evolution of jazz”.  His health had declined during the 1970s and hospital stays were thought to have made things worse. For his last six years he stayed at Baroness de Koenigswarter’s home, where he died of a stroke in 1982. 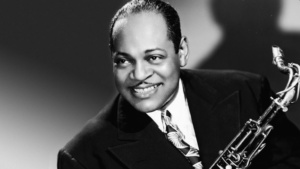 Coleman Randolph Hawkins (Nov 21, 1904 – May 19, 1969) was one of the first prominent jazz musicians to play the tenor saxophone and was the primary influence on a generation of tenor players. In the 1940s he contributed to the development of be-bop before engaging with swing music during the big band era. Known as “Bean” or “Hawk”, he was born in Saint Joseph, Missouri, attended high school in Chicago, then in Topeka, Kansas. As a child he first studied piano and cello, could read music before he learned to read English, and started saxophone at the age of nine. He was playing professionally around eastern Kansas by the age of fourteen. He played with Fletcher Henderson’s band in the 1920s and left in 1934 for a six-year stay in England, Denmark, Holland and Belgium. In 1939, returned to New York, he recorded a version of “Body and Soul”, which has been described as the “apotheosis of his entire career, creating a solo that remains the most perfectly conceived and executed example of jazz tenor-sax playing ever recorded.” Hawkins was quoted as saying ” I don’t think about music being new or modern. Music doesn’t go seasonable to me.”