Stories of Standards | “I Only Have Eyes for You” 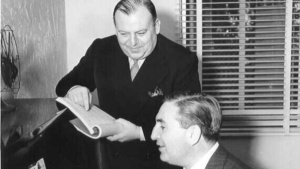 “I Only Have Eyes For You” was written in 1934 by Harry Warren and Al Dubin for the musical comedy “Dames”, with dance numbers by Busby Berkeley, The movie starred Ruby Keeler, Dick Powell, Joan Blondell and ZaSu Pitts. The 1959 recording by the Flamingos became one of the best known.

Harry Warren (born Salvatore Antonio Guaragna) (Dec 24, 1893 – Sep 22, 1981), was one of eleven children  of Italian immigrants Antonio and Lucia Guaragna, whose family name was changed to Warren when he was a child. He taught himself to play his father’s accordion, sang in a church choir, and learned to play drums well enough to perform professionally by the time he was 14 years old. He then taught himself to play piano and began working at Vitagraph Motion Picture Studios in 1915. In 1918 he joined the US Navy and began writing songs. The first major American songwriter to compose primarily for film (featured in more than 300 films), he wrote more than 800 songs, won three Oscars (for “Lullaby of Broadway”, “You’ll Never Know” and “On the Atchison, Topeka and the Santa Fe”) as well as “Chattanooga Choo Choo”, the first gold record in history.