Stories of Standards: “I Want to Be Happy” 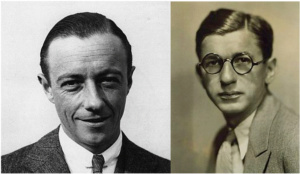 “I Want to Be Happy” by Vincent Youmans and Irving Caesar premiered in 1923 with the Detroit run of “No, No, Nanette”, which went to Chicago for a year, then to London’s Palace Theatre, where it opened March 11, 1925 and enjoyed a 665-performance run. It opened September 16, 1925 at the Globe Theatre on Broadway, where it ran for 321 performances, and Louise Groody and Jack Barker introduced the song “I Want to Be Happy”.

Vincent Youmans (September 27, 1898-April 5, 1946) published fewer than 100 songs, but of those, 18 went on to become ASCAP standards, a remarkable record. He was 17 years old when he left college to become a runner for a Wall Street firm, and was then drafted into the Navy, where he began producing troop shows; the bandmaster, John Philip Sousa, had every band play Youmans’ song “Hallelujah”. After the war he went to work as a song-plugger for Jerome H. Remick Music Publishers before working as a rehearsal pianist for Victor Herbert’s operettas. In 1921, with Ira Gershwin, he wrote the score for “Two Little Girls in Blue”, his first major Broadway composing credit, with “Oh, Me, Oh My”, his first hit song. In 1933, Youmans wrote the songs for “Flying to Rio”, the first movie to feature Fred Astaire and Ginger Rogers dancing together. While this revived Youmans prospects, he never again wrote for them. In 1934 Youmans retired after contracting tuberculosis. He died in Denver, Colorado, in 1946 and was posthumously inducted into the Songwriters Hall of Fame in 1970. In 1983 he was inducted into the American Theater Hall of Fame.

Irving Caesar (July 4, 1895-December 18, 1996) grew up in Yorkville, the same neighborhood as the Marx Brothers. His first hit was “Swanee”, written with his friend George Gershwin in 1919, which took off when Al Jolson made it a hit. His next hits were “Tea For Two” and “I Want to be Happy”, written with Vincent Youmans as they reworked “No, No,  Nannette”. They also wrote “Sometimes I’m Happy” for 1927’s “Hit the Deck”. In 1928, with Joseph Meyer and Roger Wolfe Kahn, he wrote “Crazy Rhythm”. With Ted Koehler he wrote “Animal Crackers in My Soup” for the Shirley Temple film “Curly Top”. In the 1930s Caesar wrote a series of songs promoting world peace; while the US federal government turned them down, they were later published by the Anti-Defamation League of the B’nai B’rith. He served on the board of ASCAP for 33 years, was a founder of the Songwriters Guild of America and died at the age of 101 years.