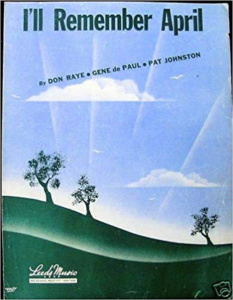 “I’ll Remember April” (1941) by Gene de Paul, Patricia Johnston and Don Raye was introduced in the 1942 Abbott and Costello movie “Ride ‘Em Cowboy”, where it was sung by Dick Foran. Considered unconventional at the time, this was seen as an asset by the late 1940s, when Charlie Parker and Bud Powell made recordings of it. The song has since been become a jazz standard, recorded by hundreds of jazz and pop bands and singers.

Gene de Paul (17 Jun, 1919 – 27 Feb, 1988), pianist, composer and songwriter, was born in New York City, trained as a classical pianist and served in the US Army in World War II. He joined ASCAP in 1941 and composed music primarily for motion pictures. With Don Raye he was nominated for an Academy Award for Best Music, Original Song in 1942 for “Pig Foot Pete”, composed for the movie “Hellzapoppin”. As the song wasn’t actually included in that film, but was used in 1941’s “Keep ‘Em Flying”, it wasn’t actually eligible for the award, which instead went to “White Christmas”. He composed the 1953 hit song “Teach Me Tonight” and with lyricist Johnny Mercer composed the score for “Seven Brides for Seven Brothers” and the score for the Broadway musical “Li’l Abner”. He was inducted into the Songwriters Hall of Fame in 1985.

Don Raye (16 Mar 1909-29 Jan 1985) wrote songs ranging from “Boogie Woogie Bugle Boy” to “You Don’t Know What Love Is”, “This Is My Country” and “Ballad of Thunder Road”, successfully writing vaudeville, jazz, rock and roll and everything in between. He began as a song-and-dance man, contracted with film studios in 1940, joined the Army in 1941 and returned to song writing after WWII, at which time he produced many hit standards. He died in 1985, the same year he was inducted into the Songwriters Hall of Fame.

Patricia Johnston (24 Oct 1922-25 Nov 1953), a friend of Don Raye, co-wrote the lyrics to “I’ll Remember April” and is credited as sole composer and lyricist of “You’re My Favorite Memory”. Born in Kansas City, she died in New York City, and very little is known about her life.