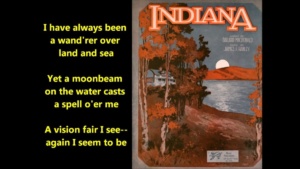 “(Back Home Again in) Indiana” by James F. Hanley with lyrics by Ballard MacDonald was first published in January 1917. Hanley and MacDonald had secured permission from  the publisher of Paul Dresser’s song “On the Banks of the Wabash, Far Away”, to use a couple of bars of the music,  which had been  adopted by the Indiana state legislature as the state song in 1914. Hanley and MacDonald had then reproduced much of the structure and many of the key phrases from the song, in essence making it a contrafact of Dresser’s. Dresser’s younger brother , the novelist Theodore Dreiser, considered suing for plagiarism, but was dissuaded by the publisher. In addition,  MacDonald was familiar with such lawsuits, having successfully sued Fred Helf, publisher of “The Barbarshop Chord”, a song which MacDonald had begun and left unfinished. When Helf published it without MacDonald’s name, he lost the copyright infringement lawsuit and went out of business.  Since 1946 the Indianapolis 500 has featured “Back Home Again in Indiana” in pre-race ceremonies, with Jim Nabors singing most often from 1972 until 2014. Charlie Parker based “Donna Lee” on the “Indiana” chord changes, as did Fats Navarro with “Ice Freezes Red” and Lennie Tristano in “Ju-Ju”. Another contrafact was written by Joe Young, Jean Schwartz, and Joe Ager whose “In a Little Red Barn (On a Farm Down in Indiana) used key words and phrases from “Indiana”, as well as the same harmonic structure in the chorus.

James F. Hanley (Feb 17, 1892 – Feb 8, 1942) served  in the 82nd Division of the US Army during WWI and while enlisted wrote the army musical “Toot Suite”.  After the war he became a vaudeville accompanist and composer, working with a wide variety of lyricists. His best known songs, in addition to “Back Home Again in Indiana” were “Second Hand Rose” (1921) and “Zing! Went the Strings of My Heart” (1934 music and lyrics). He was inducted into the Songwriters Hall of Fame in 1970.

Ballard MacDonald (or Macdonald) (Oct 15, 1882 – Nov 17, 1935) was a charter member of ASCAP, graduated from Princeton and studied at the Sorbonne. He wrote the lyrics for “Somebody Loves Me” by George Gershwin, as well as for “Second Hand Rose”, made popular by Fanny Brice and revived by Barbra Streisand. He contributed songs to several movies while working for MGM and directed “The Big Casino” in 1933.