Stories of Standards—Jeannine by Duke Pearson 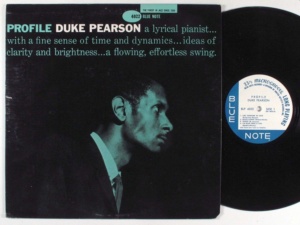 “Jeannine” was composed by Duke Pearson in 1960 and an early cover appears on the Cannonball Adderley album “Them Dirty Blues”, recorded in February 1960. Donald Byrd’s cover appeared on his November 1960 album “At the Half-Note Café”. Several vocalese versions with lyrics by Oscar Brown, Jr. were also recorded.

Columbus Calvin (Duke) Pearson Jr. (17 Aug 1932 – 4 Aug 1980) started his musical training at age five on piano and was nicknamed Duke by his uncle, a fan of Duke Ellington’s. As a teenager, Pearson took up brass instruments (mellophone, baritone, and trumpet). While in the Army (1953-1954) he met pianist Wynton Kelly and was so impressed that he went back to the piano. His “Tribute to Brownie”, dedicated to Clifford Brown, was recorded by the Cannonball Adderley Quintet on their “Sophisticated Swing” album. In 1961 he went on tour to Brazil with Nancy Wilson, which inspired his composition “Cristo Redentor”. He had also joined the Donald Byrd-Pepper Adams Quintet. Pearson became ill and newcomer Herbie Hancock filled in for him, eventually taking the position permanently. From 1961 until 1970 Pearson was a studio musician and producer for Blue Note albums, where he was influential in that label’s move to hard bop. He stopped work with Blue Note in 1971 when co-founder Frank Wolff died. Pearson taught at his alma mater Clark College in 1971. While he continued to accompany vocalists, notably Carmen McRae, in the 1970s, he spent a great deal of time-fighting the effects of multiple sclerosis, though he taught at Clark College in 1971, toured with Carmen McRae and Joe Williams through 1973, and reformed his band at that time.

Oscar Brown, Jr. (10 Oct 1926 –29 May 2005) singer, songwriter, playwright, poet, civil rights activist, and actor who twice ran for public office (Illinois state legislature and U. S. Congress). While his father, a lawyer, wanted him to follow in that profession, he helped at the practice for a while, then went first into advertising, then into songwriting. While working for Gershuny and Assoc., Brown was asked to act as a disc jockey on a black radio station, which featured advertising by a fraternity brother of Gershuny and Sheldon Sosa. Unfortunately, he was supposed to start at 5:30 a.m., an unworkable time for him. In addition, he made pointed and controversial comments about the Korean War. Mahalia Jackson recorded his song “Brown Baby”, at which point he focused on songwriting. His play writing and other productions were critically acclaimed, but seldom managed great financial success. He died of osteomyelitis before he could contribute lyrics to Karrin Allyson’s album “Footprints”; she included his songs “A Tree and Me” and “But I Was Cool” in his memory. His book “What It Is: Poems and Opinions of Oscar Brown Jr.” includes lyrics to songs he never got to record as well as some of his better-known songs. donnie l. betts produced a biography “Music is My Life, Politics My Mistress: The Story of Oscar Brown Jr.’ in 2005.