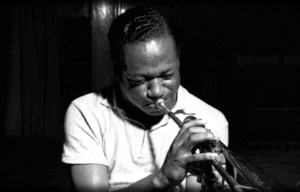 “Joy Spring” was written in 1954 by Clifford Brown in honor of his wife, Larue Anderson, whom he called his “joy spring”. She was a classical music student, whose thesis “Classics versus Jazz” was written to demonstrate the superiority of classical music over jazz. Her friend Max Roach introduced her to Clifford Brown, who took her aside and said, “Honey, the whole world is not built around tonic/dominant.” She subsequently became a jazz devotee.

Clifford Brown (30 Oct 1930-26 Jun 1956) started playing trumpet at age ten, having become fascinated with his father’s trumpet. When he was thirteen his father gave him a trumpet of his own and provided private lessons from Robert Boysie Lowery. Brown started Delaware State University as a math major before transferring to Maryland State College, where he played in the Maryland State Band. In June 1950 he was seriously injured in a car accident, leading to a year-long hospitalization. Dizzy Gillespie visited Brown in the hospital and encouraged him to pursue his musical career. With his playing limited to piano for months, Brown never fully recovered and routinely dislocated his shoulder for the rest of his life. Brown was never interested in drugs or alcohol; Sonny Rollins, who joined Brown and Roach’s quintet following Harold Land’s move, said “Clifford was a profound influence on my personal life. He showed me that it was possible to live a good, clean life and still be a good jazz musician. In 1994 LaRue Brown Watson, Clifford’s widow, established the Clifford Brown Jazz Foundation, directed by Clifford Brown III, grandson of Clifford Brown and respected Bay Area trumpeter and music producer. Clifford Brown, in a very short life, earned the profound respect and admiration of generations of musicians and followers. The city of Wilmington, Delaware, created the Clifford Brown Jazz Festival in his honor in 1989 and it has grown to be the largest free jazz festival on the East Coast.