Stories of Standards—Lester Leaps In 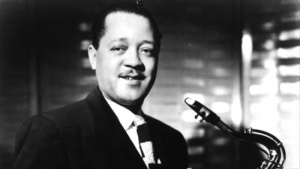 Tune in weekday mornings to hear our favorite versions of “Lester Leaps In.” Rodney Franks presents Stories of Standards Monday through Friday at 7:50 and 8:50 am!

“Lester Leaps In,” based on the chord progressions of George and Ira Gershwin’s “I Got Rhythm,” was composed by tenor saxophonist Lester Young. The initial 1939 recording featured alternating solos by Young and Count Basie, with an emphasis on minimalism, rated 98 on a scale of 1 to 100 by jazz.com, listed among the Milestone Recordings in American Music at the Three Perfect Minutes site.

Lester Willis Young (Aug 27, 1909 – March 15, 1959) was born in Woodville, Mississippi, to Willis and Lizetta Young, and played in the family band as a child and teenager. He learned to play trumpet, violin and drums, leaving the band in 1927 when they booked tours in areas governed by Jim Crow laws. He joined the Bostonians and chose tenor saxophone as his primary instrument. After several years of leaving home to work, then returning, he left home permanently in 1932 when he joined the Blue Devils, led by Walter Page. In 1933, having settled in Kansas City, he joined the Count Basie band, where his laid-back style contrasted sharply with the heavily vibrato style of Coleman Hawkins, who was the dominant tenor saxophonist at the time. Young left Count Basie’s band to replace Hawkins in Fletcher Henderson’s orchestra, where continued requests to play like Hawkins precipitated a move to the Andy Kirk band for six months before returning to Count Basie, where he also played clarinet on The Kansas City Sessions recordings on Commodore Records in 1938. Young left the Count Basie band in 1940 and made a number of independent recordings before returning to Basie in 1943, which was cut short by his induction into the Army, where he was not allowed to play his saxophone and was court-martialed after marijuana and alcohol were found among his possessions. He was in detention for a year and was discharged in 1945. This experience inspired his composition “D. B. Blues,” “D. B.” standing for detention barracks. His last tour and recordings were made in Paris in March 1959; he died within hours of returning to New York. In 2003 Young was added to the ASCAP Wall of Fame. Lester gave the word “cool” its ongoing positive meaning; he also used the word “dig” to mean a deeper perception and used “bread” to mean money; “homeboy” is another of his uses and he applied “lady” to people regardless of gender. He encouraged Harry Belafonte to sing professionally and introduced Jack Kerouac to beat. His influences are many and varied, extending far across the spectrum of American culture.

Stories of Standards—"Time After Time"