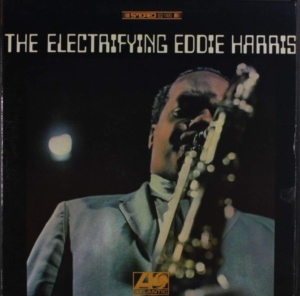 “Listen Here”, written by Eddie Harris, was first released as a single in August 1966, and went to #11 on the R&B charts and #45 on the Hot 100. Initially the lead track on 1967’s album “The Electrifying Eddie Harris”, “Listen Here” has been popular with both musicians and fans ever since its release.

Eddie Harris (October 20, 1934 – November 5, 1996) was born and raised in Chicago by a father from Cuba and mother from New Orleans. His cousin Bernice Benson began teaching him how to play piano when he was three years old. He studied with Walter Dyett at DuSable High School, as did Nat King Cole, Dinah Washington, Gene Ammons and Bo Diddley, among others. While there he learned to play clarinet (for Dyett a pre-requisite to all other instruments), vibraphone and saxophone (which had been his goal). After college Harris was drafted into the US Army, where he was a member of the 7th Army Band, having already mastered piano, saxophone, vibraphone, clarinet, trumpet, trombone, and bassoon. As a member of the Seventh Army Symphony Orchestra he took classical saxophone lessons at the Paris Conservatory of Music. After returning to the US from Europe he signed a contract with Vee Jay Records in New York City. His first album “Exodus to Jazz” included his own arrangement of Ernest Gold’s theme for the movie “Exodus”. A shortened version of this reached such commercial success (It was the first jazz record to be certified gold.) that some jazz critics took it as a sign that Harris had “sold out”. He moved to Columbia Records in 1964 and in 1965 to Atlantic Records, which released his album “The In Sound”, which restored his credibility in jazz circles. In 1969, an unrehearsed session with pianist/vocalist Les McCann at the Montreux Jazz Festival was so well received that Atlantic released it as “Swiss Movement”. Lively and inventive, he originated several combination instruments which included reed trumpet, saxobone (tenor saxophone with a trombone mouthpiece), and guitorgan, holding a US patent for a reed mouthpiece for the trumpet, cornet, trombone, and flugelhorn. He also worked with the electric Varitone saxophone, which added a sub-octave as well as affecting the timbre and tone of the saxophone. He developed the Eddie Harris Attachment, a wind synthesizer which enabled saxophone players to play in five-part harmony.  In the 1960s and 1970s he branched out to rock-jazz and comedy, not all of which was well received. In the early 1980s he performed with Horace Silver’s Quintet and provided much of the music for “The Bill Cosby Show”.