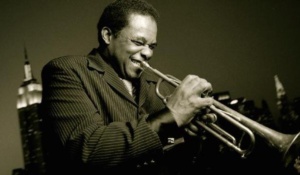 Tune in weekday mornings at 7:50 and 8:50 am to Stories of Standards when host Rodney Franks presents our favorite versions of “Little Sunflower.”

Stories of Standards is sponsored by ListenUp .

“Little Sunflower” by Freddie Hubbard was first recorded in 1966 and released in 1967 on the album “Backlash.”

Frederick Dewayne Hubbard (Apr 7, 1938 – Dec 29, 2008) was a bebop, hard bop and post-bop jazz trumpeter, who greatly influenced the progression of those forms. Starting with mellophone and trumpet at Arsenal Technical High School in Indianapolis, IN, he was recommended to the Arthur Jordan Conservatory of Music where he studied with Max Woodbury, principal trumpeter of the Indianapolis Symphony Orchestra.

While still a teenager, Hubbard worked with Wes and Monk Montgomery. When 20 years old, he moved to New York, where he played with musicians including Philly Joe Jones, Sonny Rollins, Slide Hampton, Eric Dolphy, J. J. Johnson, and Quincy Jones. In 1961 he played on “Olé Coltrane” “Africa/Brass” and was described as “the most brilliant trumpeter of a generation of musicians who stand with one foot in ‘tonal’ jazz and the other in the atonal camp”, winning DownBeat’s “New Star” award on trumpet that year and joining Art Blakey’s Jazz Messengers. In 2006 he was awarded the National Endowment for the Arts Jazz Master award.