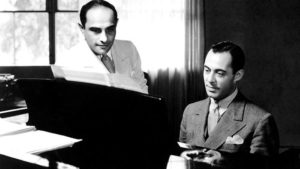 Tune in to Stories of Standards on weekday mornings at 7:50 and 8:50 am to hear our favorite versions of this song as presented by Rodney Franks.

The song “Lover” was introduced by Jeanette MacDonald in the 1932 film “Love Me Tonight,” in which she played a princess who falls in love with a tailor (Maurice Chevalier). The film also introduced “Isn’t It Romantic” and “Mimi”, Chevalier’s signature song in later years. In this film, Rodgers and Hart originated a method they called “rhythm dialogue,” in which dialogue was spoken with a musical background. Rodgers later explained that while interpretive innovations were all right once a song was established, he was concerned lest excessive stylization obscure both the melody and lyrics when a song was new and not yet established.

Richard Charles Rodgers (Jun 28, 1902 – Dec 30, 1979) began composing when nine years old and continued until shortly before his death. He met Lorenz (Larry) Hart when 16 years old and later said “I left Hart’s house, having acquired in one afternoon a career, a partner, a best friend and a source of permanent irritation.” When on the verge of taking a job as a traveling salesman he was asked to write the score for “The Garrick Gaieties”; he did and the song “Manhattan” set him on the road to lifelong professional status. He wrote 30 musicals with Lorenz Hart, 13 with Oscar Hammerstein II, and 7 more with other lyricists, won Pulitzers, Tonys, Oscars, Grammys, and Emmys (the first to win an EGOT), writing more than 900 published songs and forty Broadway musicals. In 1978 he was awarded The Kennedy Centers Honors for lifetime achievement in the arts and was an original member of the American Theater Hall of Fame.