Tune in weekday mornings at 7:50 and 8:50 am for Stories of Standards when Rodney Franks presents our favorite versions of “Moment’s Notice” all week long!

“Moment’s Notice” (1957) by John Coltrane was featured on Blue Train and recorded 9/15/1957 for Blue Note under an agreement with Blue Note Records founder Alfred Lion. The recording artists included John Coltrane on tenor saxophone, Paul Chambers on double bass, Kenny Drew on piano, Curtis Fuller on trombone, Philly Joe Jones on drums and Lee Morgan on trumpet. All songs on the album were written by Coltrane save one (“I’m Old Fashioned: by Jerome Kern and Johnny Mercer) and the album was inducted into the Grammy Hall of Fame in 1999. While Coltrane only recorded “Moment’s Notice” once, other artists have regarded “Moment’s Notice” as a standard. 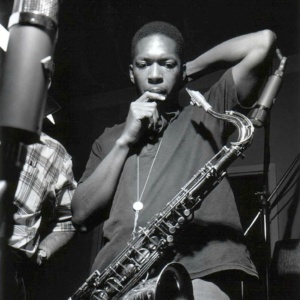 John William Coltrane (23 Sept 1926-17 Jul 1967) grew up in North Carolina. Shortly after his twelfth birthday Coltrane’s father, aunt and grandparents all died within the space of a few months, after which he was raised by his mother and a close cousin. Before acquiring his first saxophone, an alto, he played clarinet and alto horn. He moved to Philadelphia in 1943, where he immediately joined the local music scene and met other  players including Jimmy Heath and Benny Golson. Having joined the navy in August 1945, he became one of a very few Navy men to serve as a musician in the base swing band without having first been granted musician’s rating. By the end of his Navy service he was acting as a leader in the band and had already made his first recordings. Between 1946 and 1955 he worked his way up from local bands to national ones, including big bands led by saxophonists Johnny Hodges, and Earl Bostic, and Dizzy Gillespie, who required that he switch from alto to tenor saxophone in 1947. During this period he was introduced to bop, with a major development resulting from seeing Charlie Parker perform on June 5, 1945. In a 1960 interview he said, “the first time I heard Bird play, it hit me right between the eyes.” Coltrane went on to play with Thelonious Monk, Miles Davis and many others, sometimes freelance, sometimes in bands that he formed. He switched from plastic mouthpieces to metal mouthpieces with a stiff #5 reed. Among John Coltrane’s many honors and awards are induction into the Down Beat “Jazz Hall of Fame” in 1965, a posthumous Grammy for Best Jazz Solo Performance on the album “Bye Bye Blackbird”, the 1991 tribute to Miles Davis, the Grammy Lifetime Achievement Award in 1997, a special Pulitzer Prize in 2007 which cited his “masterful improvisation, supreme musicianship and iconic centrality to the history of jazz” and induction into the North Caroline Music Hall of Fame in 2009. His spiritual searches are recognized in his veneration by the African Orthodox Church in San Francisco, which incorporates his music and lyrics into its liturgy. In 1966 he said to Nat Hentoff ” “There is never any end…there are always new sounds to imagine, new feelings to get at. And always there is the need to keep purifying these feelings and sounds so that we can really see what we’ve discovered in its pure state. So that we can see more and more clearly what we are . . . we have to keep on cleaning the mirror.”

In 2009, a new President was elected and in the private residence of the White House he hung a candid portrait of Coltrane snapped by the photographer Jim Marshall, showing the saxophonist in a particularly pensive moment backstage in 1966. A few weeks later, the Coltrane family received a photo of the President contemplating the image, with the inscription: “…from a huge fan of your father’s, Barack Obama.”