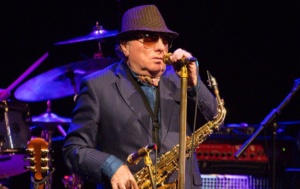 “Moondance” (1970) by Van Morrison (Sir George Ivan Morrison), is Van Morrison’s favorite song and one he most frequently performs in concert. First released as the title song on his third album,  it is regarded as one of his most successful jazz compositions.  Morrison has said “With ‘Moondance’ I wrote the melody first. I played the melody on a soprano sax and I knew I had a song so I wrote lyrics to go with the melody. That’s the way I wrote that one. I don’t really have any words to particularly describe the song, sophisticated is probably the word I’m looking for. For me, ‘Moondance’ is a sophisticated song. Frank Sinatra wouldn’t be out of place singing that.””Moondance” was listed as #226 in Rolling Stone magazine’s December 2004 feature “The 500 Greatest Songs of All Time” (#226) and is listed among The Rock and Roll Hall of Fame’s 500 Songs that Shaped Rock and Roll. It was featured in the movie “An American Werewolf in London” (1981). The song established Morrison’s reputation.

Born 31 August 1945 in Bloomfield, Belfast, Northern Ireland, Sir George Ivan Morrison as a teenager played instruments including guitar, harmonica, keyboards and saxophone for local show bands. In the mid 1960s as the lead singer for the the Northern Irish band “Them” he recorded the classic “Gloria”. His solo career began with “Brown Eyed Girl” in 1967. He won the 1994 Brit Award for Outstanding Contribution to Music, is in both the Rock and Roll Hall of Fame and the Songwriters Hall of Fame. In 2016 he was knighted for services to the music industry and to tourism in Northern Ireland. Fans refer to him as “Van the Man”. His idiosyncratic melding of soul music, R&B, Celtic traditional, jazz and stream-of-consciousness narrative is sometimes known as “Celtic soul”. The Rolling Stone Encyclopedia of Rock and Roll said “his influence among rock singers/song writers is unrivaled by any living artist outside of that other prickly legend, Bob Dylan. Echoes of Morrison’s rugged literateness and his gruff, feverish emotive vocals can be heard in latter day icons ranging from Bruce Springsteen to Elvis Costello.”