Stories of Standards—Nardis by Miles Davis 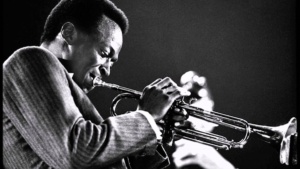 Tune in weekday mornings to hear our favorite versions of “Nardis.” Rodney Franks presents Stories of Standards Monday through Friday at 7:50 and 8:50 am!

“Nardis” was composed in 1958 by Miles Davis during his “modal phase”, to be played by Cannonball Adderley on his album “Portrait of Cannonball.” It is strongly associated with Bill Evans, who recorded it many times. Davis was leading the “First Great Quintet” in 1958, which consisted of John Coltrane (tenor saxophone), Red Garland (piano), Paul Chambers (bass), Philly Jones (drums) and Cannonball Adderley (alto saxophone). Bill Evans replaced Garland on piano for eight months (to be replaced by Wynton Kelly in late 1958) and Jimmy Cobb replaced Jones on drums. This was the group that recorded “Kind of Blue”, considered by many to be the greatest jazz album of all time. “Nardis” featured Phrygian mode and minor Gypsy scale, as did other “Spanish” works from that time, such as Davis’ “Sketches of Spain”. Davis never recorded “Nardis”; Adderley recorded it only once.

Miles Dewey Davis  III (May 26, 1926 – Sept 28, 1991) grew up in East Alton, Illinois, where a family friend gave him his first trumpet in 1935 and his father gave him a trumpet for his thirteenth birthday. Elwood Buchanan, a teacher and one of his father’s patients, gave him music lessons, stressing the importance of playing without vibrato.  He joined his high school band shortly thereafter. In 1944 Davis moved to New York City, where he played in the Billy Eckstine Band for just two weeks before enrolling in the Juilliard School of Music. He supplemented his classical studies with experience playing nights with the leaders of the new bebop movement (including Charlie Parker, Dizzy Gillespie and Max Roach). Davis then moved to his “cool” period, followed by modalism, then jazz-rock fusion (typified by “Bitches Brew” in 1970) before moving to pop, then hip-hop. The 2015 film “Miles Ahead”, starring Don Cheadle as Miles Davis, was described by co-star Ewan McGregor as “less a Miles biopic than an attempt to cast Miles in a caper flick that he *might* like to have been part of.”  Miles Davis won eight Grammy Awards and received thirty-two nominations. He was quoted as saying “A legend is an old man with a cane known for what he used to do. I’m still doing it.”