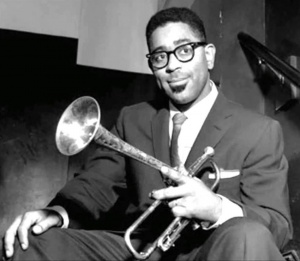 Tune in weekday mornings to hear our favorite versions of “Night in Tunisia.” Rodney Franks presents Stories of Standards Monday through Friday at 7:50 and 8:50 am beginning Monday, April 12!

Dizzy Gillespie  wrote “Night in Tunisia” in 1942; it was first recorded in 1944 under the title “Interlude.” It may have been written while Gillespie was playing with the Benny Carter Band; Gillespie said he composed it on the piano at Kelly’s Stables, a jazz club on 52nd Street in Manhattan. Having noticed that the chord progressions formed a melody, he added a bebop rhythm, introducing a syncopation into the bass line which formed a departure from the traditional 4-beat.  Frank Paparelli had transcribed Gillespie’s solos for publication; in return for this and other favors, Gillespie added Paparelli’s name to the published music. “Night in Tunisia”, ranked #40 of the top 500 standards by jazzstandards.com, is the title track of 30 CDs and is included in over 500 other CDs. The 1946 Dizzy Gillespie & His Sextet’s recording was added to the Grammy Hall of Fame in 2004. It was written in D Minor, with a series of arpeggios and leaps. Gillespie said that while playing chord progressions on the piano a Latin/oriental melody with a syncopated bass line formed, leading to “Interlude” and forming a major step into Afro/Cuban bebop. Lyrics were first written by Raymond Leveen and used in the first recording in 1944 by Sarah Vaughan. Another set of lyrics written by Jon Hendricks was used by Ella Fitzgerald in 1961.

John Birks “Dizzy” Gillespie (Oct 21, 1917 – Jan 6, 993) started studying piano when four years old and had taught himself trombone and trumpet by the time he was twelve.  From the time in 1930 when he first heard Roy Eldridge playing trumpet on the radio Gillespie was devoted to jazz. As a seventeen-year-old in his first professional appearances with Edgar Hayes’ band he acquired the nickname “Dizzy” for his unpredictable and funny behavior. Gillespie was then associated with a series of bands, notably Cab Calloway’s and Earl Hines’, and in 1945 with Charlie Parker led the way to the creation of bebop. An accident at a party in 1953 led to the 45-degree bend in his trumpet and a sound which he liked so much he had all subsequent trumpets made with that angle. His 1956 State Department-sponsored tour of the Middle East led to his being given the nickname “The Ambassador of Jazz”. With his big band, he performed at the 1957 Newport Jazz Festival, and featured Mary Lou Williams as guest artist on piano. With Chano Poco, he co-wrote “Manteca” and “Tin Tin Deo”. Gillespie joined the Baha’I faith in 1968 and spoke of it frequently on his tours abroad. Weekly jazz sessions are held in his honor at the New York Baha’I Center. He is remembered as one of the greatest jazz trumpet players of all time.