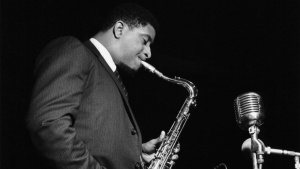 Stories of Stands is presented by host Rodney Franks on weekday mornings at 7:50 and 8:50 am. Tune in to learn about the history and to hear our favorite versions “Oleo.”

Sonny Rollins brought three songs in 1954 to a recording session with Miles Davis’ Modern Jazz Giants, one of which was “Oleo.” The other two were “Airegin” and “Doxy.” Within a very short time, all three were recognized as jazz standards. Rollins had written “Oleo” using chords from George Gershwin’s “I Got Rhythm” as a base, a method known as “contrafact” or “rhythm change.” Miles Davis was quoted as saying “He…rewrote them right in the studio. He would be tearing off a piece of paper and writing down a bar or a note or a chord… One tune he wrote was ‘Oleo.’ He got the title from oleomargarine, which was a big thing then, a cheap butter substitute.” Davis first recorded an extended solo using the Harmon mute on this recording of “Oleo.” 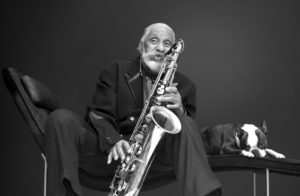 Sonny Rollins (1930-present) studied first piano, then alto saxophone when seven years old before transferring to tenor saxophone in 1946. His first professional work was in bebop, as a sideman and arranger. He was arrested in 1950 for armed robbery, spent ten months in jail, and broke parole two years later by using heroin. His breakthrough came with his work in 1954 with Miles Davis and in 1955 he was able to break the heroin addiction using the relatively new methadone treatment. Rollins withdrew from public concerts in 1959 in his first sabbatical and began playing his saxophone on the Williamsburg Bridge in New York City, to avoid disturbing one of his neighbors. His first recording after that was “The Bridge.” In 2016 a drive began to have the bridge renamed for him. In 1966 he began his second sabbatical to pursue spiritual paths, before returning to recording in 1972. Among his many honors and awards are ten honorary doctorates, a Grammy for Lifetime Achievement (2004), the Austrian Cross of Honor for Science and Art, First Class (2009), National Medal of Arts (2010), and Kennedy Center Honors (2011). In his seventy-plus years of music, he has recorded over sixty albums and has been called “the greatest living improviser.”