Stories of Standards—On a Clear Day 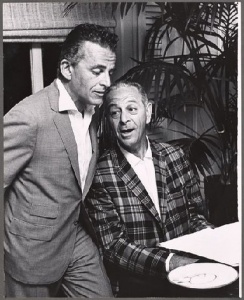 Burton Lane and Alan Jay Lerner composed this song for the 1965 musical of the same name “On a Clear Day (You Can See Forever).” Introduced by John Cullum, it was sung by Barbra Streisand in the 1970 film adaptation and was cited by many music critics as the highlight of the score.

Burton Lane (Feb 2, 1912 – Jan 5, 1997), composer and lyricist, was best known for his theater and film scores. “Finian’s Rainbow” (1947) and “On a Clear Day You Can See Forever” (1965) are the best known of his Broadway musicals. President of the American Guild of Authors and Composers for ten terms, beginning in 1957, he was also on the board of directors of ASCAP for three terms. In addition to his writing, he is also known for having discovered Judy Garland when she as a thirteen-year-old went on stage with her two older sisters. Inducted into the Songwriters Hall of Fame in 1972, he was also the 1998 recipient of the Johnny Mercer Award.

Alan Jay Lerner (Aug 31, 1918 – Jun 14, 1986), lyricist and librettist, began his musical career at the Harvard Hasty Pudding musicals. As a student, he wrote The Choate Marching Song before studying musical composition at Juilliard in 1936 and 1937. His first hit with Frederick Loewe was the Broadway musical “Brigadoon”(1947), followed in 1951 with “Paint Your Wagon”. With Kurt Weill, he wrote “Love Life” (1948) and with Burton Lane “Royal Wedding” (1951). He also wrote the script for “An American in Paris” in 1951. An advocate for writers’ rights in theatre, he was a member of the Dramatists’ Guild of America and was elected as the twelfth president in 1960 where he continued to serve until 1964. Inducted into the American Theater Hall of Fame in 1979 and winner of Kennedy Center Honors in 1985, he also received the Johnny Mercer Award (Lifetime Lyric Writing) in 1985. Works for which he won awards include “Brigadoon”, “An American in Paris”, “Gigi”, “Camelot”, “My Fair Lady” and “The Little Prince”. He also wrote more than 500 radio scripts, an autobiography, and a history of theater “The Musical Theater: A Celebration.”