Stories of Standards: “One O’Clock Jump” by Count Basie 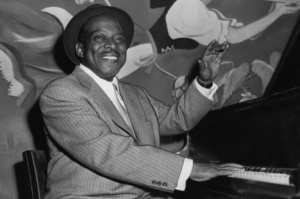 “One O’Clock Jump” began as a riff arranged by Count Basie and alto saxophonist Buster Smith, based on the Fats Waller Tune “Six or Seven Times”. The band, Basie’s Barons of Swing, was playing at the Reno Club in Kansas City, which was broadcasting live on experimental high-fidelity radio; when the announcer decided he couldn’t use the suggested title “Blue Balls” over the air, he used the time (nearly one a.m.) to come up with the title used ever since: “One O’Clock Jump”. Basie used it as his theme song and recorded it on his first session with Decca Records January 21, 1937.  He also ended every performance with this song for the following fifty-plus years. The National Record Preserving Board added “One O’Clock Jump” to the Library of Congress National Recording Registry in 2005.

According to station WRTI in Philadelphia, Basie himself said that the name “Count” came from his former bandleader Bennie Moten, who, when Basie slipped out while they were writing arrangements, would say, “Where’s that no ‘count rascal?” Both his parents were involved with music; his father played the mellophone and his mother played piano and give him his initial training. Soon after moving to Harlem in 1920, Basie ran into Greer, who was by then drummer for Duke Ellington’s band. Basie then toured on the vaudeville circuit for several years as a solo pianist, accompanist and music director, during the course of which he learned many of the skills which made him one of the most successful band leaders of the 20th century. He met Fats Waller, who taught him how to play organ. In 1928 he was stranded In Kansas City, where he joined Walter Page’s Blue Devils. The following year he joined the Bennie Moten Band, where he originated the “Moten Swing” and later took over as conductor, calling the band “Count Basie and his Cherry Blossoms”. When this band folded, he joined Moten’s new band, which after Moten’s became Basie’s nine-piece band, the Barons of Rhythm, and included five of the former Moten band members.

Count Basie and his band moved from Kansas City to Chicago in 1936; noted for its many innovations, these included the use of two tenor saxophones placed on either side of the alto saxophones, where they could engage in duels, at a time when most big bands used just one tenor saxophone. Their arrangements usually started as “head arrangements”, spontaneous creations of the band members, which were later smoothed out.