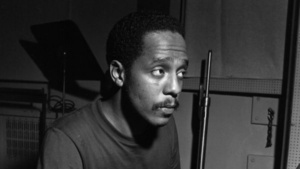 Join us for Stories of Standards on weekdays mornings at 7:50 and 8:50 am when Rodney Franks presents our favorite versions of “Parisian Thoroughfare…all week long!

Composed by Bud Powell “Parisian Thoroughfare”, it was first recorded by him in February 1951 for Clef Records, and released in 1953 on the Mercury label as “Parisian Thorofare” on the album “Bud Powell’s Moods”, later titled “The Genius of Bud Powell.” The rhythms seem to reflect the stop-and-go nature of big-city life. He recorded versions with two labels, first as a piano solo for Verve, and then in a trio version for Blue Note, which Powell stopped for unknown reasons. Clifford Brown’s recording with Richie Powell, Bud’s brother, and Max Roach includes references to Gershwin’s “American in Paris” and the French national anthem, “La Marseillaise”.

Earl Randolph “Bud” Powell (Sep 27, 1924 – Jul 31, 1966) was the son of a stride pianist and started classical music lessons as a five-year-old. Bud met Thelonious Monk about 1942 and soon became Monk’s protégé. (Monk wrote “In Walked Bud” as a tribute to their time together). Despite this, Powell’s greatest influence was Art Tatum, whom he had followed starting in his early teens. In the early 1940s, Bud was the pianist in Cootie Williams’ swing band. Powell played on a few of Williams’ recordings, including the 1944 initial recording of Monk’s “Round Midnight”. Unfortunately, in January 1945 he became separated from his fellow band members after performing and was found by private railroad police, who first beat him, then turned him over to the Philadelphia police, who jailed him for a while before sending him to Bellevue, then to a state psychiatric ward for two and a half months. Subsequent hospitalizations failed to provide any positive results to his well-being, and medication for schizophrenia appears to have worsened his state and impaired his ability to play. In 1956 his brother Richie, also a pianist, was killed in the car wreck that also killed trumpeter Clifford Brown. Powell moved to Paris in 1959, where he was supported by a longtime friend, Altevia “Buttercup” Edwards, and a fan, Francis Paudris, whose book “Dance of the Infidels” formed the basis for the movie “‘Round Midnight”, and returned to the states in 1964, a year after contracting tuberculosis. On July 31, 1966, he died of tuberculosis, malnutrition, and alcoholism.

Bill Evans described Powell as his greatest influence, saying “If I had to choose one single musician for his artistic integrity, for the incomparable originality of his creation and the grandeur of his work, it would be Bud Powell. He was in a class by himself.” Herbie Hancock noted in “Down Beat,” “He was the foundation out of which stemmed the whole edifice of modern jazz piano; every jazz pianist since Bud either came through him or is deliberately attempting to get away from playing like him.” As drummer Bud Haynes noted, had Powell lived longer and been better treated, “There’s no telling what he would have developed into.” As noted by “The Jazz Cat”: “But despite this tragic and premature end, Bud’s immeasurable contribution and influence on other musicians is astounding. Perhaps no musician overcame more adversity to share his musical gift.”