Stories of Standards—Pennies From Heaven 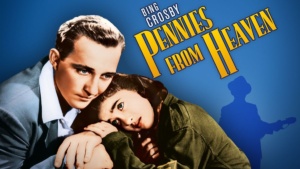 Tune in to Stories of Standards on weekday mornings at 7:50 and 8:50 am when Rodney Franks presents our favorite versions of “Pennies From Heaven.”

Arthur Johnston and Johnny Burke wrote “Pennies From Heaven” for the 1936 movie of the same name. Based on Katherine Leslie Moore’s novel “The Peacock Feather”, it was adapted for screen by Jo Swerling, who also wrote screen adaptations for “It’s a Wonderful Life” and “Guys and Dolls.”

The movie features a series of disasters followed by a happy ending;  the lyrics also focus on failures, while the chorus is far more optimistic, possibly accounting for the many times when only the chorus is recorded. Bing Crosby, who was under contract to Paramount Pictures at the time, partially financed and starred in the Columbia Pictures show, which worked out well for him. His July 24, 1936, recording of the title song, with Jimmy Dorsey & His Orchestra, was featured on the radio show “Your Hit Parade” for over 13 weeks and was inducted into the Grammy Hall of Fame in 2004. In addition, the storyline in which his goal was to become a gondolier in Venice, served as a prequel to the seven “Road” movies made with Bob Hope. Crosby insisted on Louis Armstrong being featured and top-billed as one of four stars, one of the earliest times a black performer had been listed as a lead in a white picture.

Arthur Johnston (Jan 10, 1898 – May 1, 1954) played piano for silent films before becoming Irving Berlin’s pianist and musical director of stage production. Having contracted with film studios, he moved to Hollywood in the late 1920’s where his first success was as the arranger of Charlie Chaplin’s 1931 production of “City Lights.” He served in the 351st infantry during World War II and was inducted into the Songwriters Hall of Fame in 1970. Other hits include “All You Want to Do is Dance” and “Song of the South.”

Johnny Burke (Oct. 3. 1908 – Feb. 25, 1964) after graduating in 1927 from the Univ. of Wisconsin – Madison worked as a pianist and song salesman for the Chicago office of the  Irving Berlin Publishing in the mid-1920s, before moving to their New York City office, where he began writing lyrics in collaboration with composer Harold Spina to a number of successful songs. Having contracted with Paramount Pictures, he moved to Hollywood in 1936, where he initially partnered with Arthur Johnston, then Jimmy Monaco, and then Jimmy Van Heusen. He spent his entire career at Paramount, where he worked on over 50 films, 25 of them starring Bing Crosby. “Moonlight Becomes You,” “Misty,” and “Swinging on a Star” were other hits. He was inducted into the Songwriters Hall of Fame in 1970 and in 1995 was the subject of a Broadway musical revue “Swinging on a Star.”