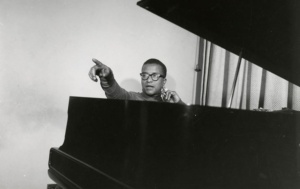 “Raincheck” was one of a collection of songs that Billy Strayhorn wrote for the Duke Ellington Orchestra in 1941; first recorded December 2, 1941, it was released in 1942.

William Thomas Strayhorn (Nov 29, 1915 – May 31, 1967) was born in Dayton, OH, although the family moved shortly afterwards to Pittsburgh, PA. His mother sent him to her family in Hillsborough, NC, where he would be safe from his father’s temper. While there Strayhorn became involved with music, playing his grandmother’s piano and Victrola record player. He returned to Pittsburgh as a teenager, attended Westinghouse High School and studied classical music at the Pittsburgh Music Institute; he wrote a high school musical. He had started taking odd jobs in grade school, working as a soda jerk and delivery boy for the local drugstore, and earned enough to buy a piano; in high school, he studied piano with Carl McVicker, who also instructed Erroll Garner and Mary Lou Williams.

Unable to work with classical orchestras, when 19 years old Strayhorn was introduced to jazz piano through Art Tatum and Teddy Wilson. In December 1938 he met Duke Ellington; having demonstrated that he could duplicate Ellington’s piano version of a song, he then showed him the Strayhorn arrangement; Ellington brought band members over to hear him and thus began a 30-year collaboration. In the 1950s Strayhorn had a solo career and worked with his friend Luther Henderson on theater productions. Strayhorn died of esophogeal cancer; he submitted his final composition “Blood Count” to Ellington from the hospital; it was then used as the third track on Ellington’s memorial album “…And His Mother Called Him Bill”. Strayhorn was fluent in French and frequently visited Paris. Duke Ellington and the Juilliard School of Music established a scholarship fund in Strayhorn’s name.