“Rhythm-a-Ning” (1957) by Thelonious Monk has a long and complex history. In 1957 Monk used this title for the first time in a recording with Art Blakey’s Jazz Messengers. Mary Lou Williams had used the initial A section (of an AABA 32-bar form) on the second chorus of her 1936 recording “Walking and Singing”. It was also claimed by Charlie Christian (as “Pagin’ Dr. Christian” or “Meet Dr. Christian”), by Al Haig (as “Opus Caprice”), and by Sonny Stitt (as “Symphony Hall Swing”). The title “Rhythm-a-Ning” refers to its base of chord changes from George and Ira Gershwin’s “I Got Rhythm”. Jon Hendricks later added lyrics and used “Listen to Monk” as the title. “Rhythm-a-Ning” appears on almost every live album recorded by Monk, starting in 1958. 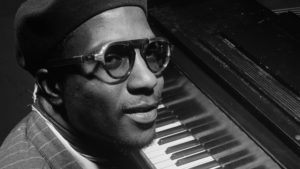 As a child, Thelonious Sphere Monk (Oct 10, 1917 – Feb 17, 1982) could play anything he heard; he learned to read music by watching over his sister’s shoulder as she practiced piano. By the time he was 13, he had won the weekly amateur competition at the Apollo Theater so often that he was banned from entering the contest. In 1941 he started working at Minton’s Playhouse, where he significantly contributed to the creation of be-bop. Mary Lou Williams, a mentor during the Minton’s period, spoke of his rich inventiveness and lack of credit, saying others tried to copy his style, complete with beret and sunglasses. Monk’s first known studio recordings were made in 1944 with the Coleman Hawkins Quartet, though he didn’t record under his name until 1947. He went on to form his groups, leading a sextet for the Blue Note label. In 1951 drugs were found in his car; though not his, he refused to testify against anyone else, which resulted in the loss of his cabaret license for seven years, during which time he focused on recording. His 1956 album “Brilliant Corners” led to his finally receiving his long-deserved acclaim. Monk was second only to Duke Ellington in the number of his compositions recorded. He was one of just five jazz musicians on the cover of Time magazine. The Thelonious Monk Institute of Jazz was founded by his family in his memory; with UNESCO, the Institute helped designate April 30, 2012, as the first International Jazz Day. Posthumous awards include induction into the Grammy Lifetime Achievement Award (1993), a 2006 special Pulitzer Prize for “a body of distinguished and innovative musical composition that has had a significant and enduring impact on the evolution of jazz”. In 2009 he was inducted into the North Carolina Music Hall of Fame.