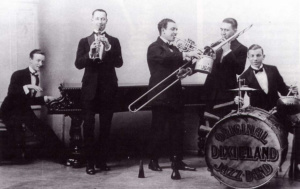 “Royal Garden Blues” was written in 1919 by Spencer Williams and Clarence Williams. As Clarence Williams (not related to Spencer) was the publisher, it is thought that he received credit for this. The song is considered to be one of the first popular songs based on a riff. It first hit the charts in 1921 and was added to the big band repertoire in the 1930s, played by Tommy Dorsey and Benny Goodman. The tune was named for the Royal Garden Dance Hall in Chicago. George Morrison’s Jazz Orchestra, long resident at Denver’s Albion Hotel (17th and Stout), recorded three takes of “Royal Garden Blues” on April 2, 1920, but none of these were ever released.

Clarence Williams (10/6/1898 or 10/8/1893 to 11/6/1965) was a pianist, composer, promoter, vocalist, theatrical producer, and publisher. Born in Plaquemine, Louisiana, of Choctaw and Creole heritage, he ran away from home as a 12-year-old, having joined Billy Kersands’ Traveling Minstrel Show, He then moved to New Orleans, where he worked shining shoes and doing odd jobs before becoming known as a singer and master of ceremonies. By the early 1910s he was well-known for playing piano and had started composing new tunes by 1913. He went to Chicago in anticipation of the exodus of talent from New Orleans following the closure of Storyville and purchased a music store. He acted as a promoter and producer and publisher until 1943, when he sold his publishing company’s catalog of over 20,000 songs to Decca for a reported $50,000. Until he lost his sight in 1956, the result of being hit by a cab, Williams spent most of his time composing.