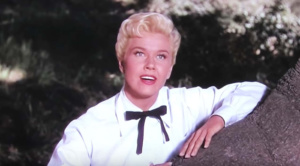 Sammy Fain and Paul Francis Webster wrote “Secret Love” in 1953 for the movie “Calamity Jane”, where it was introduced by Doris Day In the title role. It won an Academy Award that year for Best Original Song. Released as a single, it became a number one hit on Billboard and Cash Box, as well as in the UK. In addition to the popular lists, the song has been a hit on the Country and Western charts (first for Slim Whitman, then for Freddy Fender) as well as the R&B charts (for Billy Stewart). In the UK, Kathy Kirby’s 1963 remake of the song became her career record.

Paul Francis Webster (20 Dec 1907-18 Mar 1984) attended Cornell University and New York University and spent time as a sailor and as a dance instructor (for the Arthur Murray Studios) before concentrating on songwriting. His first hit, with Duke Ellington, was “I’ve Got It Bad (And That Ain’t Good)” in 1941. In the 1950s he worked primarily with Sammy Fain and the pair won two Academy Awards. Webster won a third Academy Award (and a Grammy) for his work on “The Sandpiper” (“The Shadow of Your Smile”). In 1966 he wrote the lyrics to Maurice Jara’s theme for Lara in “Doctor Zhivago”: “Somewhere My Love”. Webster was nominated for sixteen Academy Awards. In 1967 he wrote the lyrics for the theme song for the television cartoon “Spider-Man”.