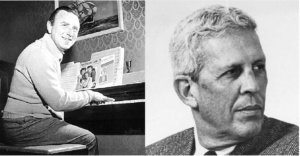 Sammy Fain and Paul Francis Webster wrote “Secret Love “in 1953 for the movie “Calamity Jane,” where Doris Day, as Calamity Jane, introduced the song. That year It won an Academy Award for Best Original Song. Released as a single, it became a number one hit on Billboard and Cash Box, as well as in the UK. In addition, the song has been a hit on the Country and Western charts (first for Slim Whitman, then for Freddy Fender) as well as the R&B charts (for Billy Stewart). In the UK, Kathy Kirby’s 1963 remake of the song became her career record.

Born Samuel Feinburg in New York City, the son of a cantor, Sammy Fain (Jun 17, 1902 – Dec 6, 1989) his family moved to Sullivan County shortly afterward; after completing school Sammy moved back to New York City to pursue songwriting. His first job was as a stockroom boy at Mills Music Publishing, where his boss soon found him playing some of his own songs in the audition room. He was thereupon given a job as a song plugger and worked for several publishers in that capacity. Around that time he met singer Artie Dunn and formed a singing team that was popular in vaudeville and on the radio. In 1925 Fain’s first published song was “Nobody Knows What a Red-Headed Mama Can Do,” with lyrics by Irving Mills and Al Dubin. With lyricists Irving Kahal and Francis Wheeler he wrote: “Let a Smile Be Your Umbrella” in 1927. Invited by Paramount Pictures to write for a Maurice Chevalier movie in 1930, Fain and Kahal moved to Los Angeles, where they wrote “You Brought a New Kind of Love To Me” with Pierre Norman. Fain and Kahal also wrote for Broadway, where a 1938 show “Right This Way” included two of their best songs: “I Can Dream, Can’t I?” and “I’ll Be Seeing You.” The former was a hit for Tommy Dorsey in 1938 and an even bigger hit for the Andrews Sisters in 1950. The latter did not become popular until 1944, two years after Kahal’s death, when both Bing Crosby and Tommy Dorsey recorded it.

After Kahal’s death, Fain worked with a number of composers. In 1945 with Ralph Freed he wrote “The Worry Song,” which was added to the Sammy Cahn and Jule Styne score for the movie Anchors Aweigh. This is the song in which Gene Kelly danced with the animated Jerry the Mouse. In 1949 Fain and Hilliard wrote “Dear Hearts and Gentle People,”‘ popularized by Bing Crosby and Dinah Shore. With E.Y. “Yip” Harburg and Fred Saidy, Fain wrote a Broadway musical “Flahooley”, which opened in 1951 to negative reviews. Set in a toy factory, the show parodied the rabid anti-communist sentiment and witch hunts that pervaded 1950s America by means of a complex storyline. The cast included Bill Baird Marionettes and Yma Sumac. While the score, which included “Here’s to Your Illusions,” was well-received, the show did not prove popular. With Hilliard, he wrote the music for Alice in Wonderland (1951), which included “I’m Late”, while he teamed with Sammy Cahn for the score to “Peter Pan”.  With Paul Francis Webster he won an Academy Award for Best Song with “Secret Love” from the movie Calamity Jane, while in 1955 they won another for “Love Is a Many Splendored Thing”. They also wrote “April Love” and “A Certain Smile”. In 1989, Fain died of a heart attack. He had been inducted into the Songwriters Hall of Fame in 1972.

Paul Francis Webster (Dec 20, 1907 – Mar 18, 1984) went to college, served in the Navy, and spent a while as a dance instructor before beginning his career as a lyricist. He went to Hollywood in 1934 where most of his early successes were with independent tunes: “I Got It Bad (And That Ain’t Good),” written with Duke Ellington (1941); “Baltimore Oriole (1942) and “Memphis in June” (1945), music by Hoagy Carmichael; and 1948’s “Black Coffee,” written with Reginald “Sonny” Burke, which was a hit for Sarah Vaughan, Julie London, and Peggy Lee. With Dimitri Tiomkin he wrote the title song for “Friendly Persuasion” (1956), which earned an Oscar nomination and “Green Leaves of Summer”, the theme song for “The Alamo” was a hit in 1960. With Johnny Mandel, he won an Oscar for “The Shadow of Your Smile”, written for “The Sandpiper”. In 1966 he contributed lyrics to Maurice Jarre’s Lara’s theme, “Somewhere My Love,” for Doctor Zhivago. Webster was nominated sixteen times for Academy Awards lyricist.