Tune in for Stories of Standards on weekday mornings when host Rodney Frank presents our favorite versions of “Something” starting on Monday, April 5, at 7:50 and 8:50 am! 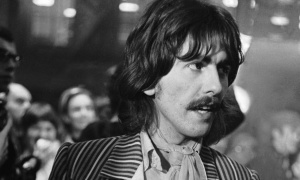 George Harrison began writing “Something” during breaks from “The White Album” in 1968, but suspended work on it for a while, believing that the tune came so easily that it might have been a melody from another song. Although originally intended to be recorded by Jackie Lomax, whose music he was producing at the time, that fell through and he offered the song to Joe Cocker, whose recording was released after the Beatles’ version. George said that he had written it as a tribute to Krishna, as was the following year’s “My Sweet Lord.” Pattie Boyd in her 2007 book (“Wonderful Tonight: George Harrison, Eric Clapton, and Me”) said he told her that it was written for her. He was using a piano, an unusual method for someone who usually worked on guitar. He said that he had pictured Ray Charles singing this when writing the words; Ray Charles recorded it in 1971. In 1969 Harrison made a demo version which included an extra verse, sung in counter-melody, over the section comprising his guitar solo on the Beatles’ official release.

The opening line was taken from a song by James Taylor, “Something in the Way She Moves”. The second line initially proved difficult;  John Lennon suggested “like a cauliflower;” Harrison first tried “like a pomegranate” and then used “like no other lover.” “Something” was released on the Beatles’ “Abbey Road” album before its release as a single, Harrison’s first composition to come out on the A-side. (“Come Together” was on the B-side.) John Lennon called it the best song on “Abbey Road” and Paul McCartney thought it Harrison’s best song. With over 200 covers, “Something” is the second-most covered Beatles song, after “Yesterday.”

George Harrison (Feb 25, 1943 – Nov 29, 2001) wrote songs including “Taxman,” “Within You Without You,” “While My Guitar Gently Weeps,” “Here Comes the Sun,” and “Something.” He had started writing while sick in Bournemouth in 1963 and achieved recognition for this in 1969, with most Beatles albums from 1965 onwards including at least two of his songs. “Revolver” included three (“Taxman,” “Love You To,” and “I Want To Tell You”). In 1970, shortly after the Beatles broke up, Harrison formed a studio band with Ringo Starr, Eric Clapton, Billy Preston, and others, to record “All Things Must Pass”, one of Harrison’s most highly rated albums which was intended to include all of Harrison’s songs that were not on the Beatles’ albums. Harrison’s 1987 album “Cloud Nine” led to the formation of the Traveling Wilburys. In 1998 Harrison was treated for throat cancer. In 1999 a deranged fan attacked Harrison and his wife, which resulted in a collapsed lung and minor stab wounds for George, while Olivia suffered minor cuts and bruises. In May 2001 the cancer returned and spread to Harrison’s brain; he died with his wife and son at his side. Martin Scorsese directed the documentary film “George Harrison: Living in the Material World” (2011). Harrison was posthumously granted The Recording Academy‘s Grammy Lifetime Achievement Award at the Grammy Awards in February 2015.