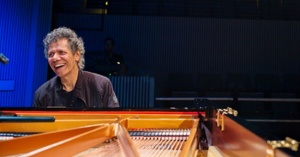 Armando Anthony “Chick” Corea (Jun 12, 1941 – Feb 9, 2021),  jazz composer, keyboardist, bandleader, and occasional percussionist, won 25 Grammy awards and was nominated over 60 times. He was introduced to the piano when four years old by his father, a trumpeter who led a Dixieland band in the 1930s and 1940s. When eight years old he started playing drums as well as studying piano with concert pianist Salvatore Sulli, later playing with the St. Rose Scarlet Lancers of Chelsea, Massachusetts, a drum and bugle corps, as a performer/soloist. He moved to New York City, where he studied music first at Columbia University, then the  Julliard School. In the early 1960s, his professional career began with Mongo Santamaria, Willie Bobo, Blue Mitchell, Herbie Mann, and Stan Getz. During live performances when playing electric piano he often used a ring modulator. In 1970, with Dave Holland, Corea formed the free jazz band “Circle”, a development from an earlier trio which also included Barry Altschul on drums and percussion and later included Anthony Braxton on reed instruments. Corea’s 1971 solo performances were recorded and released as “Piano Improvisation 1” and Piano Improvisation 2”. He also became focused on the effects of music on audiences at this time. He started a series of bands and in 1992 started the label “Stretch Records”. Exploring contemporary classical music he created an arrangement of “Spain” for orchestra and wrote “String Quartet #1” for the Orion String Quartet. He died of a rare form of cancer, shortly after being diagnosed with it. Corea had been Inducted into the International Society of Jazz Arrangers & Composers (ISJAC) Hall of Fame in 2017 (inaugural class).