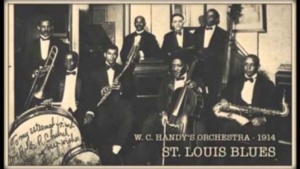 “St. Louis Blues” by W. C. Handy was published in 1914 and first recorded in 1916. It succeeded first as a blues song, was the first blues to succeed as a pop song and is basic to jazz repertoire. ASCAP called it the “most recorded song of the first half of the twentieth century, outdone in the entire century only by “Silent Night”. Jazzstandards.com ranks in #20. “St. Louis Blues” was the title of a 1958 film biography of W. C. Handy, which starred Nat King Cole.

C. Handy (William Christopher Handy) (Nov 16, 1873 – Mar 28, 1953) composer, cornetist, trumpeter, bandleader, teacher, editor and publisher referred to himself as “the Father of the Blues”. He was born in a log cabin which has been restored and is now a museum. Handy’s father, an AME pastor, believed most musical instruments were the work of the devil and, when W. C. secretly bought a guitar, ordered it returned. He did provide organ lessons, which didn’t last long, and W. C. went on to learn the cornet. He was hired to teach at the Teachers Agriculture and Mechanical College (now Alabama A&M University).

While not the originator of the blues, he was the first to publish music in the style, thus taking the Delta blues to a much wider audience. He carefully documented the sources of his works, but quit when he realized how poorly it paid and went to work as a laborer at a pipe works plant in Bessemer, Alabama. In his off time he organized a small string orchestra and taught the musicians how to read music. He then went to Evansville, Indiana, and played cornet at the Chicago World’s Fair in 1893. Having joined Mahara’s Colored Minstrels he traveled extensively (Chicago, Texas, Oklahoma, Tennessee, Georgia, Florida, Cuba, Mexico and Canada). Stopping in Alabama on their return from Cuba, and tired of traveling, he and his wife stayed with his relatives in Florence, Alabama and worked as a teacher at the Teachers Agriculture and Mechanical College from 1900 – 1902. In 1902 he traveled throughout rural Mississippi, listening to various styles of popular black music. When home he was able to recall and transcribe that music. Again feeling underpaid he returned to the Mahara Minstrels before becoming director of a band organized by the Knights of Pythias in Clarksdale, Mississippi. In 1909, having moved to Memphis, he wrote a campaign song for Edward Crump, which he later rewrote and renamed “The Memphis Blues” and the 1912 publication introduced the 12-bar blues as well as being the inspiration for Vernon and Irene Castle’s foxtrot. That year he met Harry Pace, who with Handy formed the Pace and Handy Sheet Music, Handy being under the misapprehension that blacks would be eager to buy music by black musicians. In 1917 they moved the publishing house to New York City. Pace went on to form the Pace Phonograph Company and Black Swan Records. Handy formed Handy Records in the 1920s and while they didn’t release records some of their recordings were later released on Paramount Records and Black Swan Records. In 1929 Handy and Dudley Murphey collaborated on a motion picture (“St. Louis Blues”), with Bessie Smith as the lead. It was shown in movie houses from 1929 to 1932. Handy wrote “Blues: An Anthology—Complete Words and Music of 53 Great Songs” in 1926 to “record, analyze, and describe the blues as an integral part of the South and the history of the United States”. His autobiography “Father of the Blues” was published in 1941 and inducted into the Blues Hall of Fame in 2017 in the category Classics of Blues Literature. After his death of pneumonia, Harlem’s Abyssinian Baptist Church held his funeral, with over 25,000 people in attendance.