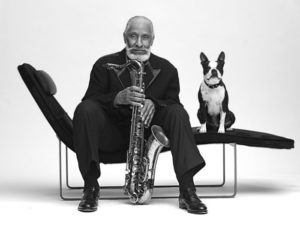 Tune in weekdays at 7:50 and 8:50 for Stories of Standards. Rodney Franks will present our favorite versions of “St. Thomas” all week long!

“St. Thomas” (1956) by Sonny Rollins was first recorded in August 1955 as “Fire Down There” by Randy Weston and released in February 1956 on the “Get Happy” album. The tune started as “The Lincolnshire Poacher” and evolved into a nursery song in the Virgin Islands which Sonny Rollins’ mother sang to him and on which he based the song “St. Thomas”. It was Rollins’ 1956 release which first became popular, while the song is still his most readily recognized composition.

Sonny Rollins (Sept 7, 1930-present) grew up in Harlem when be-bop was the dominant form of jazz. His parents were from the United States Virgin Islands and greatly encouraged their children’s interest in music. After high school he soon began playing and recording with greats including Miles Davis, the Modern Jazz Quartet, Thelonious Monk and Charlie Parker. He became addicted to heroin and in 1955 was successfully treated with methodone. While he initially thought sobriety might lessen his musical ability, this was disproved and he went on to even greater success and has been called “the greatest living improviser”.

Stories of Standards—Jeannine by Duke Pearson

Stories of Standards—Seven Steps to Heaven