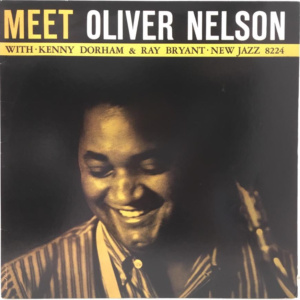 Oliver Nelson (Jun 4, 1932 – Oct 28, 1975) began his musical path by playing piano at six years old, then saxophone a few years later. While still a teenager he began playing saxophone and arranging professionally in the Louis Jordan band. He then joined the Marines, where he became a member of a Marine Corps band. While in Tokyo he became acquainted with the Tokyo Philharmonic Orchestra, which sharpened his interest in arranging music. After leaving the military he studied harmony and theory at Washington and Lincoln Universities before moving to New York City, where he played with Erskine Hawkins, organist Wild Bill Davis and many others as well as becoming house arranger for the Apollo Theater. He signed a contract with Prestige Records and recorded six albums for them before moving to the Impulse label, where he recorded “The Blues and the Abstract Truth” in 1961. Soon he was producing and arranging for Nancy Wilson, James Brown, the Temptations, Diana Ross, organist Jimmy Smith, and other well-known artists, as well as composing for TV shows, including Ironside, Longstreet, and The Six Million Dollar Man (for which he wrote the theme). He also arranged the music for the motion picture Last Tango in Paris. Friends had well-based  concerns that he was working too hard, and in 1975 while in Los Angeles he suffered a massive heart attack and died.