Stories of Standards—Stompin’ At the Savoy 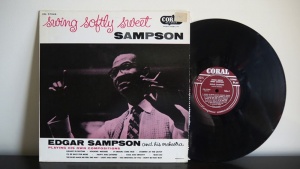 Edgar Sampson wrote, “Stompin’ At the Savoy” in 1933 while alto saxophonist with Rex Stewart’s Orchestra at the Empire Ballroom. Named for the Savoy Ballroom in New York City, it was used as the band’s theme song until the band broke up. Sampson took it with him when he went on to join Chick Webb’s band. Lyrics by Andy Razaf were added later. The song was recorded by both Chick Webb’s band (first recording made in 1934) and Benny Goodman’s. It is credited to Benny Goodman, Chick Webb, Edgar Sampson, and Andy Razaf.

Edgar Sampson (Oct 31, 1907 – Jan 16, 1973) became famous for songs such as “Stompin’ At the Savoy” and “Don’t Be That Way”. Having started studying music with the violin when six years old, he switched to alto saxophone while in high school. His professional career started in 1924, as half of a violin/piano duo with Joe Coleman, then worked with Duke Ellington in 1925. He worked with various bands before getting a spot with the Chick Webb band in 1933, where he stayed until 1936 and became known as a composer and arranger. In this capacity, he worked with bands including Benny Goodman, Artie Shaw, Red Norvo, and Chick Webb. Sampson served as musical director for Ella Fitzgerald when she took over Webb’s band after he died in 1939. He continued working until the late 1960s. 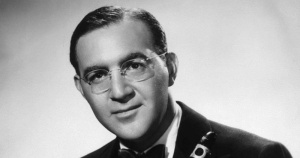 Benny Goodman (May 30, 1909 – Jun 13, 1986), clarinetist and bandleader, was known as “The King of Swing” and performed from the early 1920s through the 1970s. He led one of the first integrated jazz groups. Having become a member of the musicians’ union when fourteen years old, he worked in a band with Bix Beiderbecke. He then joined the Ben Pollack Orchestra, where he made his first recordings in 1926. Goodman moved to New York City, where he became a studio musician, playing clarinet as well as occasional alto saxophone and baritone saxophone. Invited to play at the Billy Rose Music Hall he created an orchestra that recorded “Moon Glow”, a number one hit. In 1935 on a tour in Oakland, California, with arrangements by Fletcher Henderson, Goodman’s band touched off the Swing Era. He was a recipient of the Grammy Lifetime Achievement Award and was inducted into the “Down Beat” Jazz Hall of Fame in 1957 and was a Kennedy Center Honors recipient in 1982 and inducted into the Radio Hall of Fame in 1988. Songwriters Hall of Fame described his January 16, 1938, Carnegie Hall concert as “the single most important jazz or popular music concert in history: jazz’s ‘coming out” party to the world of ‘respectable’ music.” 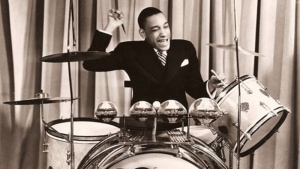 William Henry “Chick” Webb (Feb 10, 1905 – Jun 16, 1939) fought off congenital tuberculosis of the spine to become one of the best known and most acclaimed drummers and bandleaders of the big band era. In a battle of the bands with Benny Goodman’s Orchestra, which featured Gene Krupa on drums, Webb came away as the acknowledged winner. Webb hired Ella Fitzgerald in 1935 after she won a talent contest at the Apollo Theater, became the teenager’s legal guardian, and built his show around her. With his health failing Webb underwent a major operation and died, while Fitzgerald took over the band until it broke up in 1942. 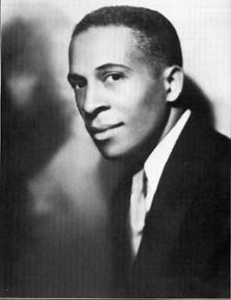 Andy Razaf (born Andriamanantena Paul Razafinkarefo ) (Dec 18, 1895 – Feb 3, 1973), poet, composer, vocalist, and lyricist, was known for songs written with Fats Waller, including “Ain’t Misbehavin'”,  “Honeysuckle Rose” and “(What Did I Do to Be So) Black and Blue”. He also wrote lyrics for “In the Mood”. He was born in Washington, D.C. to Jennie Razafinkarefo (née Waller), daughter of John L. Waller, American consul to Imerina (Madagascar), and widow of Henri Razafinkarefo, nephew of Queen Ranavalona III (last sovereign of the Kingdom of Madagascar).  Raised in Harlem, he quit school at sixteen to work as an elevator operator and a year later launched his career as a lyricist. Some of his early poetry was published in “Voice”, the first newspaper of the “New Negro Movement”. He was inducted into the Songwriters Hall of Fame in 1972 and worked as a newspaper columnist from the 1950s until his death.