Stories of Standards—Straighten Up and Fly Right 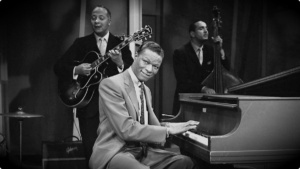 “Straighten Up and Fly Right” was written in 1943 by Nat “King” Cole and Irving Mills and was the King Cole Trio’s most popular single, reaching number one on the Harlem Hit Parade for ten consecutive weeks and was based on a traditional folk tale that Cole’s father used as a theme for one of his sermons. The Andrews Sisters version reached number eight on the charts in 1944 and was featured in the 2010 video game “Mafia II” as one of the in-game radio songs. Used in the 1995 drama “The Tuskegee Airmen”, the title was quoted by the pilots going into battle.

Nathaniel Adams Coles, known as Nat “King” Cole (Mar 17, 1919 – Feb 15, 1965), recorded over one hundred songs that became hits on the pop charts. After his NBC variety show, the first national television show to have a black host, was cancelled for lack of sponsorship, Cole said, “Madison Avenue is afraid of the dark.” Cole was a Freemason, raised in January 1944 in the Thomas Waller Lodge No. 49 in California, named for fellow Prince Hall mason and jazz musician “Fats” Waller. In 1948 Cole bought a house in the all-white Hancock Park neighborhood of Los Angeles; the Ku Klux Klan placed a burning cross on his front lawn. Castigated by the NAACP for playing at venues with all-white audiences, he was assaulted on stage in 1956 by a group of white supremacists belonging to the North Alabama Citizens Council during a concert in Birmingham, Alabama, which injured his back and stopped the performance.

Born in Montgomery, Alabama, Cole was inducted into the Alabama Music Hall of Fame and the Alabama Jazz Hall of Fame; he was awarded the Grammy Lifetime Achievement Award in 1990 and inducted into the Down Beat Jazz Hall of Fame in 1997 and the Hit Parade Hall of Fame in 2007, the Rock and Roll Hall of Fame in 2000 and the Latin Songwriters Hall of Fame in 2013. He recorded more than 150 singles while at Capitol Records and his recordings sold 50 million copies during his career. Cole was a Freemason, raised in January 1944 in the Thomas Waller Lodge No. 49 in California, named for fellow Prince Hall mason and jazz musician “Fats” Waller.  A heavy smoker for much of his life, he had started to experience health problems, loss of weight and back problems, in September 1964 and collapsed from pain after performing at the Sands Hotel in Las Vegas. In December friends managed to persuade him to seek medical advice. He was then found to have an advanced stage of lung cancer and was expected to have only months to live. Against his doctors’ advice he recorded another album, “L-O-V-E”. He vowed that if he recovered he would go on television and urge people to stop smoking.

Irving Mills (Jan 16, 1894 – Apr 21, 1985) a was a music publisher, musician, lyricist, and jazz artist promoter who was born either in Odessa, Ukraine or in the Lower East Side of Manhattan, New York. Irving and his brother Jacob (“Jack”) were noted for discovering a number of great songwriters, including Zez Confrey, Sammy Fain, Harry Barris, Gene Austin, Hoagy Carmichael, Jimmy McHugh, and Dorothy Fields. He greatly advanced and was known for starting the careers of Cab Calloway, Duke Ellington, Ben Pollack, Jack Teagarden, Benny Goodman, Will Hudson, Raymond Scott and many others. Consequently, his name was attached to far more songs he is thought to have composed or helped compose. He produced the film “Stormy Weather” in 1943, which starred Lena Horne, Cab Calloway, Zutty Singleton, and Fats Waller and the dancers the Nicholas Brothers and Bill “Bojangles” Robinson.