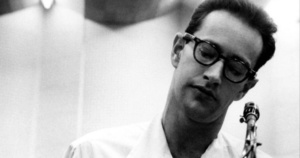 “Take Five” was written in 1960 by Paul Desmond has a long, fabled history, starting with the 1940s, when Dave Brubeck was traveling in Europe, where he was introduced to jazz performed in times other than 4/4. Drummer Joe Morello said that on the song “Sounds of the Loop” he would occasionally change the timing from 5/4 to 7/4 and had urged Brubeck to try some different timings. Brubeck followed up by assigning different timings to each of the members; Paul Desmond was assigned 5/4 and came up with “Take Five”, which went on to become the biggest hit ever for the Dave Brubeck Quartet.

Paul Desmond (Nov 25, 1924 – May 30, 1977) was, like Brubeck, a California native. Born with the name Paul Emil Breitenfeld in San Francisco, he tracked his ancestry to Moravia, but never had certainty as to the ethnicity. When twelve years old he started studying clarinet and would have studied violin, but was dissuaded by his father, who was quoted as saying violinists were “a dime a dozen….with the violin, you’ll starve.” He started on alto saxophone in high school, where he also co-editor of the high school newspaper, where he once interviewed Bob Hope. He was drafted into the Army and joined the Army band, but was not called into combat. According to Desmond’s friend Hal Strack, in 1942 they were listening to the Gene Krupa band, with singer Johnny Desmond. Paul said “that’s such a great name. It’s so smooth and yet it’s uncommon…. If I ever decide I need another name, it’s going to be Desmond.” For a short time he led a small band at the Band Box that included Dave Brubeck; he left, but prevented Brubeck from taking over. This led to a break of several years between the two and Brubeck, who with his wife Iola had three small children, forbid her from letting Desmond into the family home. One day while Dave was in the back yard hanging up diapers, Desmond showed up and was taken to see Brubeck. With an offer of arranging and performing administrative duties, as well as babysitting the children, Desmond was taken back into the band. Darius Brubeck though for some years that Desmond was an uncle.

He once said that his ambition was to sound like “a dry martini”. Known for his wit and pranks and popularity with women, he was briefly married. Once, seeing a former girlfriend on the street, he quipped  “There she goes, not with a whim but a banker”. Given his long usage of whiskey, he was startled to learn that he had lung cancer and that his liver was in remarkably good shape, all things considered. In his will, he left all proceeds from “Take Five” to the American Red Cross.