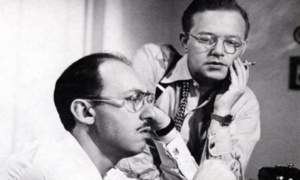 Composer Jule Styne and lyricist Sammy Cahn wrote “Time After Time” in 1946 by for the 1947 Frank Sinatra film “It Happened in Brooklyn”. First recorded Nov 19, 1946 by Sarah Vaughan with the Teddy Wilson Quartet, the 1947 film featured off-stage piano music performed by Andre Previn; Sinatra recorded it again in 1957 with the Nelson Riddle Orchestra. It has been the fourth most-recorded song of all works released in 1946.

Jule Styne (12/31/1905 – 9/20/1994) began his show business career at the London Hippodrome by jumping onto the stage with Harry Lauder, who recommended the boy’s parents get him piano lessons. They then moved to Chicago and devoted themselves to making sure young Jule had an upright piano and lessons. In 1934 Styne moved to New York, a safe distance from the Chicago gangs, and worked as a vocal coach; he was discovered there by 20th Century Fox president Joseph Schenk, Styne was then taken to Hollywood where he worked with Shirley Temple, Alice Faye and others. Having moved on to Paramount Pictures, he collaborated with Frank Loesser on “I Don’t Want to Walk Without You, Baby” which stayed on the radio hit parade for 20 weeks. Having gone back to New York, Styne and Sammy Cahn scored “High Button Shoes” (1947); with Leo Robin he scored “Gentleman Prefer Blondes” (1949), which included “Diamonds Are a Girl’s Best Friend”. With Sammy Cahn he wrote “Three Coins in the Fountain” (1954, sung by Frank Sinatra).

Sammy Cahn (6/18/1913 – 1/15/1993) grew up in the Lower East Side of New York City, where he learned violin as a child and as a teenager played with the Pals of Harmony, a small Dixieland band in addition to pit bands of burlesque houses. When 16 he saw Jack Osterman singing a self-written ballad; inspired by the concept, on the way home Cahn wrote his first song “Like Niagara Falls, I’m Falling For You – Baby”. He became a friend of piano player Saul Chaplin; together they got a room at the offices of Beckman and Pransky, where they also wrote English lyrics to the Yiddish song “Bei Mir Bistu Shein” in the mistaken belief that it was a traditional Yiddish folk song. This became a huge hit for the Andrews Sisters.While not well paid they did write material for performers including Milton Berle, Danny Kaye, Phil Silvers, and Bob Hope. With childhood friend Lou Levy he wrote “Rhythm Is Our Business”, which became a number one hit for the Jimmie Lunceford Orchestra and was Cahn’s first ASCAP-copyrighted title. With Jimmy Van Heusen he wrote many songs for Frank Sinatra, who recorded 89 of them, many on multiple occasions. Cahn was nominated for over 30 Oscars and won four times. He became a member of the Songwriters Hall of Fame in 1972 and took over the presidency for his friend Johnny Mercer when the latter became ill. In 1983 he was honored with the Johnny Mercer Award, the Songwriters Hall of Fame’s highest accolade.

Together Styne and Cahn wrote some of the twentieth century’s most memorable songs.