Stories of Standards—Where or When 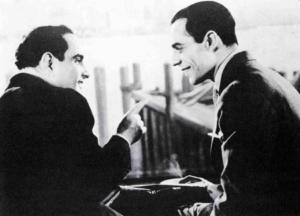 Richard Rodgers and Lorenz Hart wrote  “Where or When” for the 1937 Broadway musical “Babes in Arms” about teenage children of actors who’ve gone on a five-month tour; the teenagers are attempting to avoid being sent to a work farm by a local sheriff. The 1939 movie version retained only two of the original songs: “Where or When” and “Babes in Arms”, deleting “My Funny Valentine“; “The Lady Is a Tramp“; “Johnny One Note” and “I Wish I Were in Love Again“.  The Broadway musical was choreographed by George Balanchine; the movie deleted all dance scenes and is often referred to as having “depoliticized” it. In 1943 Guy Lombardo and His Royal Canadians had a hit recording of it and the song was featured on “Your Hit Parade” eight times. Rodgers, in his autobiography “Musical Stages” says that he and Hart received mail from college psychology professors who used the song to illustrate lectures on the psychic phenomenon of deja vu.

Richard Rodgers (Jun 28, 1902 – Dec 30, 1979) composed 43 Broadway musicals and over 900 songs, making him one of the most significant American composers of the 20th century. He was the first to win an Emmy, a Grammy, an Oscar and a Tony, the combination now known collectively as an EGOT. He also won a Pulitzer, making it a PEGOT (Pulitzer, Emmy, Grammy, Oscar, Tony) currently one of only two who have done so (Marvin Hamlisch is the other). He began playing the piano as a six-year-old and when in his early teens attended Camp Wigwam in Maine, where he wrote some of his first songs. Rodgers was best known for his collaborations, first with Lorenz Hart, then with Oscar Hammerstein II. With the latter he wrote musicals known for telling stories based on characters and drama rather than strictly comedy.  Phillip Levitt, a friend of Rodgers’ older brother, had introduced Rodgers to Lorenz Hart in 1919. Their early efforts were not particularly successful and Rodgers was considering abandoning the profession when they had a breakthrough in 1925 with a benefit show called the “Garrick Gaieties”; originally intended to run for one night only, it was a hit and was allowed to re-open.

In the early 1930s the duo moved to Hollywood, where they produced music for a few movies, including the classics “Blue Moon” and “Isn’t It Romantic?”.  They returned to Broadway in 1935 and began a series of hit shows that ended only with Lorenz Hart’s death in 1943. The 1936 “On Your Toes” included the ballet “Slaughter on Tenth Avenue”, choreographed by George Balanchine. “The Boys From Syracuse” included “Falling In Love With Love”. Hart’s ill health and difficulty working led Rodgers to collaborate with Oscar Hammerstein II, with whom he had initially worked before meeting Hart.  Rodgers and Hammerstein produced five of the most popular shows in musical history: “Oklahoma!” (1943), “Carousel” (1945), “South Pacific” (1949, which won the 1950 Pulitzer Prize for drama), “The King and I” (1951) and “The Sound of Music (1959). “Edelweiss”, frequently mistaken for a traditional folk song, was the last song written by Richard Rodgers. Their musicals earned a total of 37 Tony Awards, 15 Academy Awards, two Pulitzer Prizes, two Grammy Awards, and two Emmy Awards. In 1978 Barnard College awarded Rodgers its highest honor, the Barnard Medal of Distinction. At the 1979 Tony Awards, Rodgers was presented with the Lawrence Langner Memorial Award for Distinguished Lifetime Achievement in the American Theatre. The 46th Street Theatre was renamed the Richard Rodger Theatre in his memory in 1990. A member of the American Theatre Hall of Fame, Rodgers started the Academy of Arts and Letters  in addition to  endowing an award for non-established musical theater composers to produce new productions either by way of full productions or staged readings.

Lorenz Hart (May 2, 1895 – Nov 22, 1943), lyricist, was writing musicals at Columbia University when he met Richard Rodgers. Though they produced successful musicals through the 1920s the Depression reduced income from stage productions sufficiently to lead them to Hollywood, where they wrote for the movies through 1935. They then returned to Broadway, where each of their musicals produced several hit songs. Lorenz Hart was widely read, brilliantly witty and profoundly sad, troubled by alcoholism and a devastating self-image; he produced lyrics of astonishing breadth and depth. By 1942 his problems with alcohol and mental health had entirely precluded further writing; the death in spring 1943 of his mother, with whom he lived, was devastating; after drinking heavily and walking in the snow some months later,  he contracted double pneumonia and died November 22, 1943.