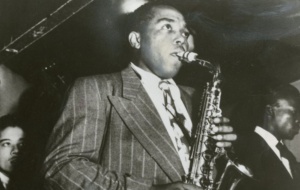 Tune in on weekday mornings when host Rodney Franks presents Stories of Standards. You’ll hear our favorite versions of this song at 7:50 and 8:50 am all week long starting Monday, December 1!

“Yardbird Suite”, a 32-bar ABBA composition, was first composed in 1940 and first recorded 11/28/1946 by the Charlie Parker Septet, consisting of Charlie Parker, Miles Davis, Lucky Thompson, Dodo Marmarosa, Vic McMillan, Arvin Garrison and Roy Porter; it became known as an anthem for beboppers. Originally known as “What Price Love?”, it is one of a very few songs for which Parker wrote lyrics. Parker had played the song with Jay McShann’s band in Kansas City; producers of McShann’s recordings rejected it as they wanted only blues material. The copyright was initially surrounded by confusion, and later by lawsuits involving Parker’s heirs.

Charles “Charlie” Parker, Jr. (Aug 29, 1920 – Mar 12, 1955) was born in Kansas City KS; his family moved across the river to Kansas City MO in 1927 and he learned to play alto saxophone in school in 1933. Two years later he left school to become a professional musician; he practiced for hours every day. Jay McShann said in a 1999 interview that around that time the group hit a chicken as they were driving to a gig. Parker yelled “Back up! You hit a yardbird!”, got the bird and cooked it for dinner that night. Injuries from a 1936 car accident for which opiates were prescribed had long-lasting and unfortunate consequences. Several years later he moved to New York, where he became bored with the changes most commonly used. He then found that by using the higher intervals of a chord as a melody line he got the sound he’d been searching for. This was then the basis for his mature style, established by the mid 1940s; in 1942 he signed up with Earl Hines for an eight-month engagement and in 1944 joined the Billy Eckstine band. In 1945 Parker became leader of his own group and with Dizzy Gillespie founded bebop; they had a six-week tour of California night clubs; Parker then stayed on until a nervous breakdown in 1946 was made worse by addictions to heroin and alcohol and led to time in a local hospital. He returned to New York in January 1947, where he was doing well until his cabaret license was revoked in 1951. He made his European debut at the Paris International Jazz Festival in 1949 and visited Scandinavia in 1950. In 1955, while traveling to Boston for a gig, Parker stopped off at Pannonica de Koenigswarter’s home, where his health so alarmed her that she had her physician exam him; diagnosed with severe ulcers, Parker refused hospitalization, but agreed to rest for a few days. On 12 March she found he had died of pneumonia.