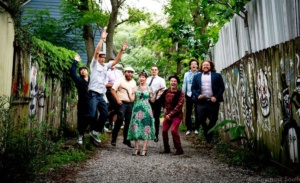 While New Orleans suffers with water rescues and power outages in the aftermath of Hurricane Ida, a group of musicians is touring the country telling the musical story of the Big Easy. The Secret Six of New Orleans brings their modern brand of traditional jazz to Nocturne Jazz and Supper Club in Denver on Wednesday, September 1, 2021 for sets at 6:30 and 8:45 pm.

“We left town a week ago before Ida was a storm, and we’re all hanging in there while things are a little chaotic at home. We can’t go back until power is restored,” says Reid Poole, band leader of The Secret Six and Colorado native. “At least we’re out here working, unlike our musician brethren in the city. We love to spread the music beyond the bayou,” said Poole.

The Secret Six evoke the rich style of collective improvisation and ensemble playing, specializing in stomps, blues, rags and no-frills hot jazz. “There are actually seven of us in the band, four horns and three on the back line.” The name of the band is a tip of the hat to Louis Armstrong’s semi-pro baseball club, the Secret 9.

Band leader Reid Poole is happy to be an active band leader, freelance musician, and educator in the great city of New Orleans. The trumpeter and Univ. of No. Colo. graduate fell in love with the Crescent City on a high school band visit there.  He relocated to New Orleans after gaining a Master’s degree from the Eastman School of Music. Poole was last at KUVO studios in May 2018, when his Dinosaurchestra broadcast live from the Phyllis A. Greer Performance Studio.