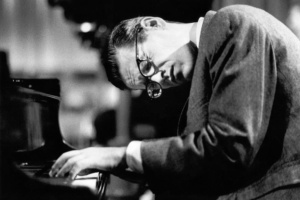 Bill Evans was born in Plainfield, NJ, on Aug. 16, 1929, to a mother of Ukrainian ancestry and a father of Welsh descent. His father had alcohol-related disorders. His early training was in classical music. He began piano lessons at the age of six and also studied violin and flute. He started playing in a high-school band when he was 12. Later he played a variety of piano jobs as a teenager in a number of Dixieland bands while he studied at the Southeastern Louisiana University. He was recruited by Ralph Pottle, a former band director, to come to Southeastern. Pottle discovered Evans on one of his recruitment tours around the country. Even though Evans is known as a pianist, Pottle actually offered him a scholarship to perform the flute in the Southeastern band. About 1950 Bill formed his first trio with his friends, the recently deceased Connie Atkinson on bass and Frank Robell on drums, and played in clubs in New Jersey (The CD Very Early with posthumous released rehearsal tapes). Student by day, performer by night. He graduated with high honors and was the recipient of the university’s “Distinguished Alumnus Award.” Later Bill played in the 5th Army Band from 1950-1952. While there he formed a combo called “The Casuals” that played near the base, on the radio, and various other venues. It was guitarist Mundell Lowe who encouraged him to go to New York. In 1955, with 75 dollars in his pocket, he moved to New York where he played with Herbie Fields and Jerry Wald. His early gigs were with Mundell Lowe, Red Mitchell, Tony Scott, and Charles Mingus. From an interview with Mundell Lowe (by Ron Nethercutt)  More on Bill Evans 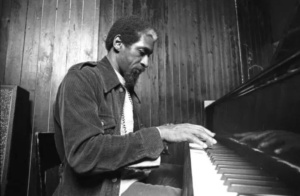 Mal Waldron was born in New York, NY, and studied classical piano as a child but picked up the alto sax to play jazz. His piano teacher admonished him for improvising on classical works, calling it “illegal.” Waldron found his niche in jazz, where he said it was “illegal” to reproduce the same notes time after time. In 1947, after service in the Army, he concentrated on jazz piano and graduated from Queens College. He wrote music for dance companies, played with R&B groups, recorded with Ike Quebec, and joined Charles Mingus’ Jazz Composers Workshop in 1954 where he was able to explore new avenues for jazz. He became the “house” pianist for Prestige Records and in 1957 made several recordings with Jackie McLean and with John Coltrane, who recorded Waldron’s “Soul Eyes.” In 1957 he became Billie Holiday’s accompanist until her death in 1959, and together they wrote: “Left Alone.” More on Mal Waldron 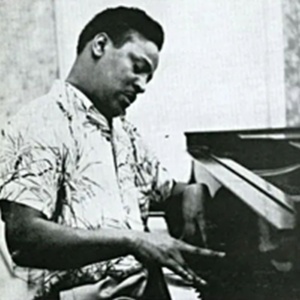 Carl Perkins was born in Indianapolis IN but worked mainly in Los Angeles. He is best known for his performances with the Curtis Counce Quintet, which also featured Harold Land, Jack Sheldon, and drummer Frank Butler. He also performed with the Clifford Brown Max Roach group in 1954, and recorded with Frank Morgan in 1955. Perkins composed the standard “Grooveyard.” His playing was influenced by his polio-affected left arm, which he held sideways over the keyboard. More on Carl Perkins