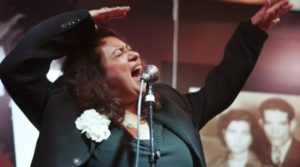 Most recently, Venus played the part of freedom fighter “Lola Devine” in the futuristic multimedia project, “The Five Pointers” created by renowned artist Thomas “Detour” Evans for Red Bull Music. Venus has won several Westword Magazine music awards and for 14 yrs, the host of the popular radio show “Jazz Odyssey” on 89.3 KUVO, and regularly interviews music luminaries such as Taylor McFerrin, Derrick Hodge, Dave King (The Bad Plus), Dennis Ham (Thundercat) and many others.

Venus Cruz’s Extra Do-Over Bday Bash
Venus is doing a birthday do-over because last year’s birthday sucked. Catch her at the Appaloosa Grill on Thursday, March 11, at 8 to 10:30 pm.

“Venus Cruz has a super-advanced ear, a way with words and spirit that connects with people. She is also a brilliant lyricist who infuses the poignant with a sense of humor.”  — Greg Tanner Harris