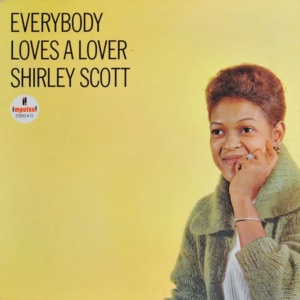 Next on the Vinyl Vault, a gem from 1964, Shirley Scott’s “Everybody Loves a Lover.”  Then husband Stanley Turrentine is on most of the tracks, and he re-released the first three tunes on a later CD reissue of his music.  But we’ll dig into side two of this Shirley Scott record, ONLY available on vinyl!

The Philadelphia native studied trumpet and piano, but by the 1950s she was swinging behind the Hammond B-3 with the likes of Eddie “Lockjaw Davis.”  She was married to saxophonist Stanley Turrentine through the 60s, and they often recorded and performed together.  We lost Ms. Scott at age 67 in 2002.

Despite her five-decade career, Shirley Scott remains under appreciated, especially since her catalog was listed among the losses of the 2008 Universal music fire.  It’s time to celebrate the B-3 with Shirley Scott, only on the Vinyl Vault!

Check out the organ magic of Shirley Scott on Tuesday, July 27, at 8:30 pm on the Vinyl Vault. Only on KUVO JAZZ!