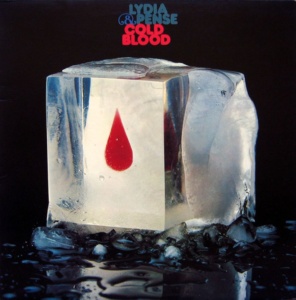 This week a little bit of the Funky Boombox leaks into the Vinyl Vault with some Bay Area R&B from Cold Blood and their 1976 release entitled “Lydia Pense and Cold Blood.” Lydia Pense was the lead singer who could belt the blues, soul and the funk as well as jerk those tears on gut wrenching ballads. Cold Blood came together in 1968 and released 8 albums through the late 1970s when the group disbanded. The band reformed 10 years later and has continued to tour and record ever since then. Pense, now 72 remains with the band and, if not for COVID-19, would be playing gigs this summer.

Besides the charismatic Pense up front, the band is known for its horn driven sound comparable to their East Bay colleagues Tower of Power. Those two bands have traded horn players over the years and share the same descriptive label, “East Bay Grease.” Cold Blood got their first break when Bill Graham booked them at his legendary Fillmore West concert venue in the late 60s.

The album we’ll hear on Tuesday was the last before the band’s 10 year hiatus. The band was in top form at the time with the tight horn section and a deeply grooving rhythm section. The programme features a combination of band originals as well as covers by songwriters such as Alan Toussaint, Al Kooper, Booker T. Jones and Ashford and Simpson.

The album was released on the long-defunct ABC Record Label and is a tough one to find, but the Vinyl Vault has it and you can hear it Tuesday, July 7 at 8:30pm on KUVO Jazz.