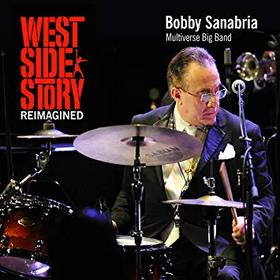 Bobby Sanabria is an amazing artist whose talents go beyond music and the Arts. His accomplishments in music and education are worthy of admiration.  To honor the centennial of the birth of maestro Leonard Bernstein, Bobby sought out the daughter of Mr. Bernstein to seek approval for him to take the music of West Side Story which as a Bronx born Puerto Rican influenced his youth after seeing the film at the historic and majestic Paradise Theater of the Bronx with his family. Not content to just do the same ole’, same ole’, Sanabria completely rearranged the entire soundtrack from the stage play and film written by Jerome Robbins featuring music composed by Leonard Bernstein with lyrics by Stephen Sondheim. Bobby took his Multiverse Big Band to Dizzy’s Club Coca Cola of NYC’s Lincoln Center to perform the music live in front of an enthusiastic audience that included members of the Bernstein family. Released on the Jazzheads label, the 2-disc set of West Side Story Reimagined is a superlative recording that is best listened to start to finish to fully grasp the greatness of this instant classic that already ranks as one of the finest soundtrack recreations in jazz history as well as a top ten all-time Latin Jazz recording. Bobby is the musical director of the Multiverse aggregation, he plays drums, cowbell and assorted other instruments while injecting exciting brief narrations and background vocals. Curiously, Lincoln Center was constructed on the sight of the former San Juan Hill neighborhood where portions of West Side Story were filmed, but that’s another story for another day. One of the highlights for me is the track known as Gym Scene which is a magical mix of the blues and mambo. Throughout the performance you can hear elements of straight ahead jazz flowing seamlessly with blues, Afro-Cuban and Afro-Rican rhythms.

Bobby Sanabria is an educator at the prestigious Manhattan School of Music where he has led and recorded several CDs with his M.S.M. Afro-Cuban Jazz Orchestra, Bobby is also the first Puerto Rican graduate of the esteemed Berklee School of Music in Boston. Bobby began his professional career with Mongo Santamaria then moved on to be a part of the Mario Bauzá Afro-Cuban Jazz Orchestra for many years before moving on to lead his own groups like Quarteto Aché and Ascensión that came to Denver to play for KUVO Jazz about 10 years ago. Sanabria is a proud Bronxite and is heavily involved in the “Bronx is on the Rise” movement. He and his long-time companion Elena Martínez run the Bronx Music Heritage Center (BMHC), they conduct tours of the former jazz and Latin music clubs that abounded in the South Bronx, they have managed to get several streets named in honor of the gifted musicians who lived in the Bronx for many years, Elmo Hope, Donald Byrd and Mike Amadeo are only a few examples. Bobby offers lectures on the history of music of his home borough, vocal harmony-doo wop, hip hop alongside jazz and Latin, he proves that the Bronx is truly the “boro of music”. Finally, Bobby Sanabria is a recipient of the Bronx Walk of Fame honor and has a street sign in his name along the majestic Grand Concourse of the Bronx. I will close by paraphrasing Bobby as he personifies his mantra which is so accurate, “Jazz and Latin music with a New York attitude!” he does it at the highest level of execution.