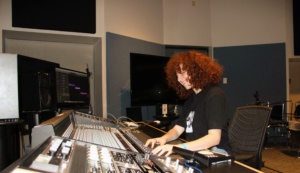 After attending Berklee College of Music, Zoe studied Recording Arts and Music Business with a focus on Bass Performance, at the University of Colorado Denver.

Originally from Bs. As, Argentina, she has been a sound engineer, bass player, and session musician for numerous groups around the world. Some of her best highlights include having original music in advertisements, producing and managing an artist featured in +300 playlists on Spotify.

In the last 5 years, Zoe developed a passion for the audio world. She has worked in various recording studios and as a freelance producer and technician, like FTM and CSR. As a hard-working professional, Zoe has collaborated as an Audio Engineer with artists such as Royce de Zorzi, Jelie, Cycle Trio, The Pace Makers, Dunia Shawty, Mouck Menace, The New Freedom Movement, Totem Pocket, Kejddra, Willie Green, Summer Bedhead, Moon Maze, Diego Frenkel, Fede Flaviano, Alison Taís & Verena Fuentes.

Currently, Zoe works as a Live Sound Engineer for Dazzle Jazz Club and Duke’s Garage, and holds the position of “Director of Operations” at Musicians Tip Jar. Zoe is also playing with the Denver local Funk/Hip-Hop group “People in Between” as the main bassist and leader.